Master Leo Au-Yeung is the UK’s leading Wing Chun practitioner and teacher.  Last year he was invited by the producers to choreograph the fight scenes for the movie of legendary Wing Chun pioneer Yip Man called ‘Ip Man‘, alongside genre legends Sammo Hung and Donnie Yen.

Of course Yip Man’s most famous pupil was legendary martial artist and actor Bruce Lee who studied under him from 1954 to 1957 and in the years since Bruce Lee’s untimely death Wing Chun has become the preeminent form of Chinese Kung Fu practiced today.  Most recently Yeung has been working on the ‘Ip Man’ prequel ‘The Legend Is Born: Ip Man‘ which will be out in 2010.

I sat down with Master Au-Yeung to discuss Chinese Kung Fu, ‘Ip Man’ and working alongside genre legends.

Far East Films: Who were your influences growing up?

Leo Au-Yeung: When I was young, Donnie Yen and Jackie Chan influenced me most. When I got a little bit older, Bruce Lee become another influence on me as he was more a martial artist and movie star rather than just a movie star. 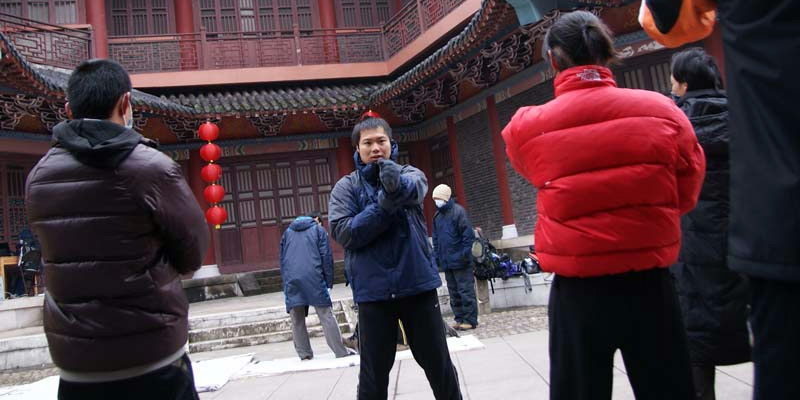 FEF: How did you get into martial arts originally?

LAY: I always liked martial arts since I was 4 years old, however I didn’t know which style to choose or where to start. I was confused and did not know what to do until I met my uncle who had done Wing Chun for years. I showed my interest in learning kung fu and he introduced me to Wing Chun and suggested that I learnt from Grandmaster Ip Chun as he is one of the best known Masters in Hong Kong. This is how I begin my Wing Chun training.

FEF: How did you get involved in the ‘Ip Man’ project?

LAY: One of the ‘Ip Man’ movie investors is a Wing Chun enthusiast and he is also a good friend of Master Samuel Kwok. His intention in making this movie was to demonstrate the ‘real’ Wing Chun to the rest of the world. For this reason, about one year ago he asked around to see if there was anyone people could recommend to choreograph the ‘Ip Man’ movie. He was looking for someone who had a very good understanding of Wing Chun and was able to demonstrate the art in a more traditional manner.  Master Kwok straight away thought that I would be the most suitable candidate, as he truly has confidence in my ability in Wing Chun.  He believes that I am capable of representing him by choreographing the movie. On the other hand, besides Wing Chun I also know a wide range of martial arts, so it really helped when making the comparison between Wing Chun and other styles.

FEF: Tell me about your involvement with the project?

LAY: I stayed in China for nearly two months, I was responsible for coaching the actors and stuntmen in Wing Chun.  They had to fight like a Wing Chun expert in the movie. I only had three weeks to train them up, it seems impossible in the beginning but fortunately most of them had been doing martial arts for more than 10 years so picked things up really quickly. At the end of this intensive course they were able to achieve a decent standard of the art. After that I spent the rest of my time coordinating with Sammo Hung on choreography for the many fight scenes in the movie. Our biggest challenge was how to make Wing Chun look good on the screen, as most of the Wing Chun movements are very small and complex. Sometimes we had to exaggerate the movements a bit to make them look better on screen. Of course we still have to keep the accent of Wing Chun.  In the end we spent over 7 days to choreograph just 3 minutes in the movie. 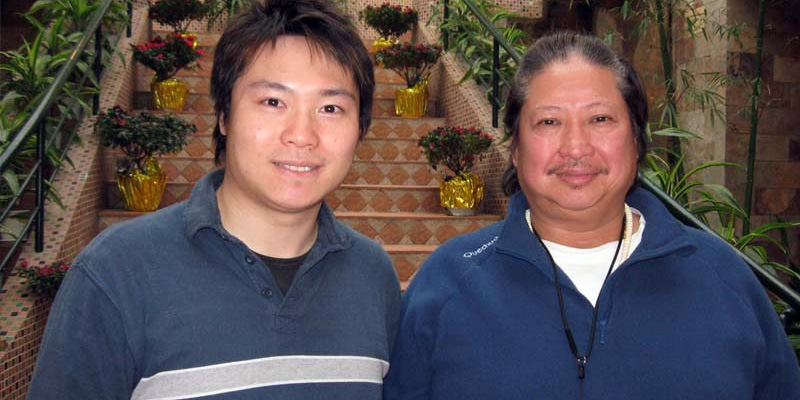 LAY: I only met Donnie very briefly but the impression he gave me is he is very passionate about martial arts and he is a very professional action actor. Sammo is a very easy going and humourous person. He’s just like a ‘big brother’ to us, he always looks after his crew. For example, he would always buy us breakfast in the morning, in order to keep us warm. Sometimes he would ask his wife to cook something on the night before and he would bring it to us on the next day. Moreover he was always in the first few to arrive on set so he really set a good example to the rest of the crew. I really respect him and it is a pleasure to work with him.

FEF: How about his ability in front and behind the camera?

LAY: In terms of Sammo’s capability in using the camera and choreography, I do not think anyone has any doubts that he is one of the top action directors out there. However, the most difficult bit is how we can choreograph something very special and unique to the audience. As you know, nowadays most people have seen a lot of action already so it is not easy to create something one hasn’t seen before.

FEF: How influential was Yip Man to Chinese martial arts?

LAY: Firstly, Yip Man was a great Wing Chun master, because as you can see from his pictures, he is not a very big guy yet he was still able to defeat a bigger opponent. In this aspect he was really able to demonstrate the accent of Chinese Kung Fu. You don’t have to be massive in size to become a good fighter, it is more important that you know how to use your body effectively.

Secondly, he was the first person to bring Wing Chun to Hong Kong and in the last thirty years, Wing Chun has become one of the most popular martial arts. A lot of people are doing Ip Man Wing Chun worldwide. He is also the teacher of Bruce Lee, and I think everyone knows how Bruce influenced the Chinese martial arts, a lot of people do Chinese kung fu because of Bruce.

LAY: Quite a lot really but if you ask me I would say all Liu Chia-Liang‘s movie, eg ‘The 36th Chamber of Shaolin‘, ‘My Young Auntie’ and ‘Mad Monkey Kung Fu‘ etc . Of course the more recent one is ‘Ip Man’. 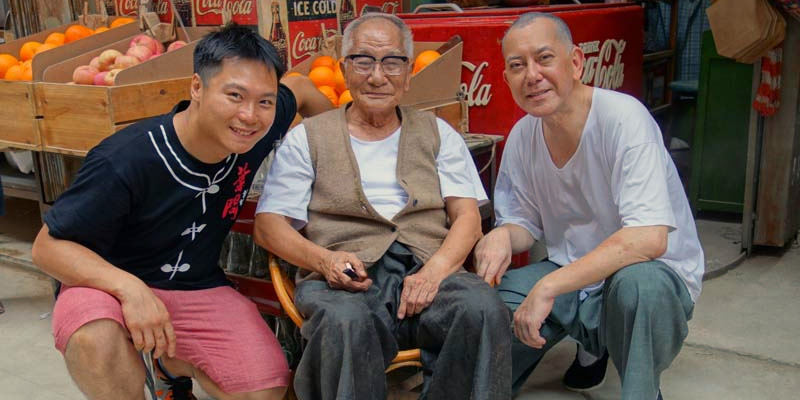 LAY: In my opinion they are both good action actors, but I have not seen them fighting in real life so I don’t know how good they are and which one is better.

FEF: What’s the best fight scene you have ever seen?

LAY: On this occasion I have to say one of the fighting scenes in ‘Ip Man’ – the Donnie fight with one against ten of the Japanese.

FEF: If not Martial arts what would you have done?

LAY: I don’t really know because without Martial arts I would be a different person. Maybe I would just be like most of the people staying at home playing Xbox etc.

FEF: You run a martial arts school in London. Tell me more…

LAY: The objective of our school is to teach first -rate traditional Chinese kung fu. I only teach kung fu to a small group of people, because I believe quality is more important than quantity. Especially in Wing Chun, for me half of an inch difference is dead or alive. I pay attention to every single detail, even if one finger is out of place then it is a mistake for me. I always tell my students that no matter how many years you have been training, it doesn’t mean a thing. What is most important is how correctly you train. I am not teaching martial arts for a living, this means I don’t need to run my school like a business or a factory, my first priority is train my students up, not increase the number of schools.

In Wing Chun it is important to have correct body structure and arm position. It just takes an inch out of position to have a negative impact on a student. In larger classes you don’t have the opportunity to notice or correct this and over a period of time this becomes a habit with the student. This flaw becomes apparent when the student goes onto Chi Sau, giving more opportunities for an opponent to hit. It is sad for me when I Chi Sau with some Wing Chun practitioners who have trained for years only to find they have not covered the foundations properly. 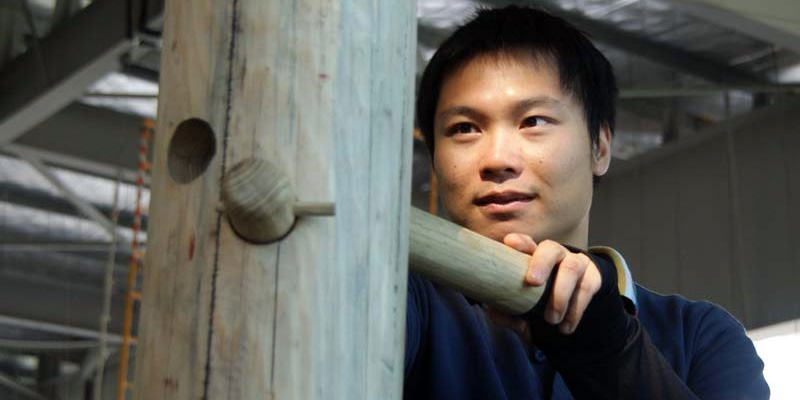 You can find out more about Master Leo Au Yeung at chinesekungfu.co.uk. ‘Ip Man’ is available to buy now from Amazon.com, Amazon.co.uk and YesAsia.com.

Far East Films would like to thank Leo Au-Yeung and Phil Hobden for making this interview possible.