GKIDS and Anime Limited are bringing the Japanese animated fantasy romance ‘Weathering With You’ (天気の子) to UK and Ireland cinemas on January 17, 2019.

Written and directed by Makoto Shinkai, the film revolves around a high-school boy who runs away to Tokyo where he befriends a girl who appears to be able to manipulate the weather. The English voice cast includes Brandon Engman, Ashley Boettcher, Lee Pace, Alison Brie, Emeka Guindo, and Riz Ahmed.

Synopsis: High school freshman Hodaka Morishima leaves his home on an isolated island and moves to Tokyo, but he quickly finds himself in financial trouble. Living his days in isolation, he eventually lands a job as a writer for a shady occult magazine. Then one day in an alley, Hodaka meets a young girl named Hina Amano, bright and strong-­willed, who possesses a strange and wonderful ability: the power to stop the rain and clear the sky.

Details on screening locations for ‘Weathering With You’ can be found at weatheringwithyoufilm.co.uk. 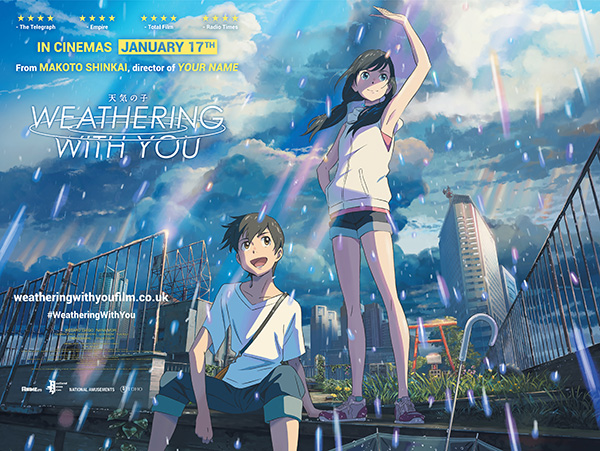