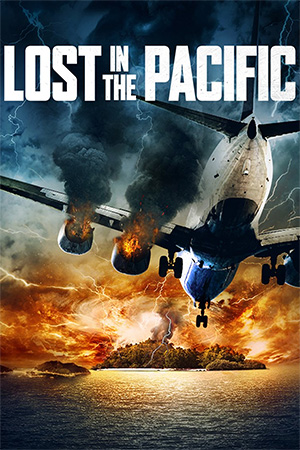 This follow up/reboot of Vincent Zhou’s earlier plane-in-peril picture ‘Last Flight’ is basically just a re-do of that previous film albeit with better production values, slicker CGI (sort of), more action and a former Superman in the shape of Brandon Routh. However, despite the increased budget and (slightly) more monster action, ‘Lost in the Pacific’ still suffers from an abundance of naffness that plagued the previous flick.

The inaugural flight of a super-duper jet, complete with annoying passengers and assorted crew, is cut short when the captain has to make an emergency landing on a mysterious island in the Pacific. The same island from ‘Last Flight’ to be exact, which is home to some nasty mutant cat creatures that take no time in trying to attack the plane and its passengers. Managing to escape the creatures, the plane also picks up two military operatives, who had been stranded on the island, who then make quick work of taking over the plane for their own nefarious needs. It’s then up to the plane’s cook Routh (who is really an ex Special Forces type: of course he is!) to take back the plane ala Steven Segal in ‘Under Siege’.

That all sounds like some B-movie fun but alas due to turgid pacing, clunky dialogue and an oh-so-serious tone, ‘Lost in the Pacific’ is often just a slog. Zhou attempts to inject proceedings with a sense of tension but instead it’s just an overabundance of characters talking, talking and talking. Pointless family drama further clogs up proceedings when one really just wants some more killer cat action. The flick certainly looks and feels a lot slicker than ‘Last Flight’ with the copious CGI giving the flick a sort of bubblegum sheen, which seems at odds with all the stone-faced characters.

Russell Wong (‘Romeo Must Die’) at least injects some nasty snark into proceedings as the money hungry owner of the hi-tech plane and there are a couple of cool action scenes including the part where the crew have to land the plane on an aircraft carrier in the middle of the ocean at night. Much like ‘Last Flight’, the pace is just too static and there isn’t enough fun or silly action to recommend it to even B-movie aficionados.