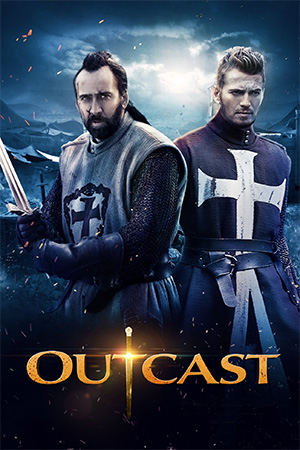 I liked ‘Outcast’. In fact, this two-bit reviewer thought it was a good old fashioned good-guys-versus-bad-guys-romp. A mix of U.S. and Chinese talent unite for the relatively simple story of Shing (On), the evil son of an emperor, who after killing his father to take control of his empire must hunt down his escaped not-so-evil-siblings who want no part of his dastardly master plan. Fleeing into the badlands they come under the protection of jaded crusader Jacob (Christensen) a tough warrior who has lost his way after years of fighting and killing. Seeing a chance at redemption he strives to protect the siblings and teams up with his former mentor (Cage) for an epic showdown with Shing and his ever swarming army.

Ok, sure there is a fair amount of cheese, annoying shaky-cam abounds, dodgy accents are all over the place, the film sometimes feels rushed/re-edited and Cage, well, I’m not really sure what Cage is doing but despite all this ripe for ridicule fodder, ‘Outcast’ manages to outrun its faults and become a solid actioner. Production values are decent, the international cast are better than you might expect (even though Cage attempts to send proceedings through the hamming-it-up stratosphere!) and despite the aforementioned dreaded shaky-cam nonsense the action is actually pretty good. Nicely choreographed, often brutal and giving the narrative propulsive momentum means ‘Outcast’ rockets along nicely. Neither overly seriously or dourly pretentious it’s certainly cheesy at times but most often exciting, action packed and reminiscent of something one would happily rent during the 90s heyday of never-ending-video-store-action-film-releases!

Going back to Cage: usually I’m happily to defend the guy, even at his most outrageous and low rent, but here he threatens to derail proceedings entirely with his dodgy accent, constantly squinting eye (!) and over-the-top scenery chewing. Still, he’s not in it all that much and equips himself well in the action scenes. Christensen isn’t as bad as the rest of the internet may have you believe, makes for a believable action hero and certainly seems to throw himself into proceedings. Likewise, Andy On is good value and is able to pull off the bad guy schtick with aplomb. The flick has a fairly gritty visual style and, well, it’s a pretty straightforward take-as-it-is action/adventure flick.

As mentioned, the shaky cam could have been eased up and the overly critical will no doubt have fun tearing it apart (which they predictably have done!) but it’s mercifully short on CGI nonsense and dragging-the-pace-down-melodrama and just gets on with the story and action at hand. Plus, if anything Cage is also some good comedic value, whether intentional or not, and there is plenty of hard edged sword action to mean the 90 minutes pass by swiftly.