Breakout Brothers (2020)
Triad leader Roller (Patrick Tam) and life-sentence inmate Scar (Justin Cheung) maintain the balance of power as the bosses of the prison they’re incarcerated at. Life at the prison gets disrupted by the arrival of new inmate Mak (Adam Pak), who has run-ins with both Scar and Roller. With things going so badly for him in prison, Mak has no choice but to join in the breakout plot being hatched by Chan (Louis Cheung). However, Roller and Scar also end up being part of the plan!

Breakout Brothers 2 (2021)
Since their last breakout attempt, Roller (Patrick Tam), Mak (Adam Pak), Scar (Justin Cheung) and Chan (Louis Cheung) have changed a lot and settled down, bringing some unlikely peace to the prison yard. However, the order is upset once again with the arrival of new inmate Ho Chun (Ron Ng), a hotshot entrepreneur who is being held in detention for charges of abetting a crime. With his trial three months away, the arrogant Ho Chun uses money to get his way behind bars. He lures away Roller and Scar’s underlings and becomes the new boss. However, when Ho Chun learns that he may be facing a life sentence after a new witness emerges in his case, he decides to enlist Roller, Mak, Scar and Chan to help him break out of prison.

Breakout Brothers 3 (2022)
Former prison warden Tang (Kenny Wong) ends up in the slammer himself due to corruption charges. Meanwhile, Ho Chun (Ron Ng) is back behind bars and still plotting his way out. Ho Chun partners up with Tang in hopes of utilizing the latter’s familiarity with the prison to orchestrate an escape. They even try to set up Roller (Patrick Tam), but in the process Ho Chun realizes that Tang has something else up his sleeve. Ho Chun then decides to work with Roller, Mak (Adam Pak) and new prison warden Ma (Moses Chan) instead to get to the bottom of Tang’s scheme.

The ‘Breakout Brothers’ boxset is available to pre-order now from YesAsia.com. 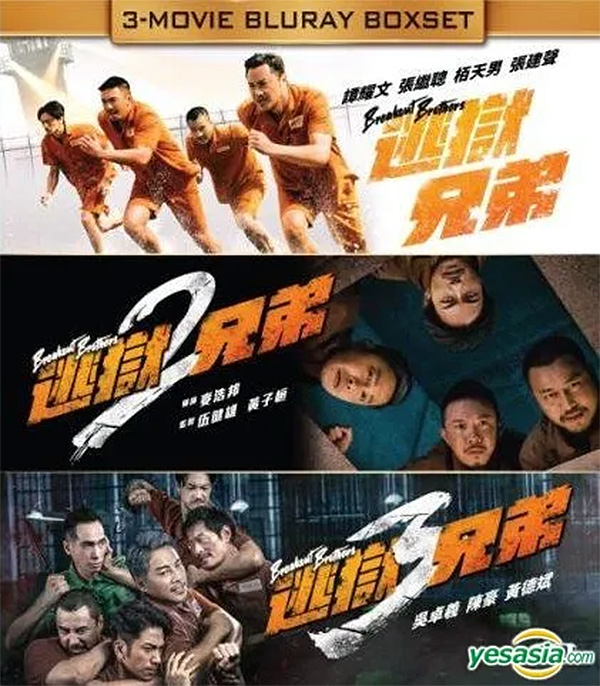