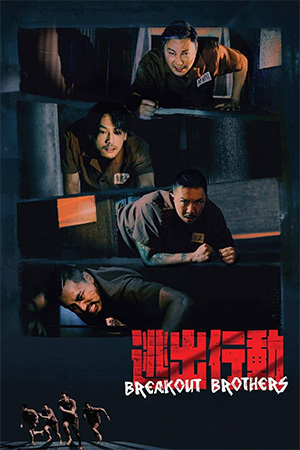 New inmate Mak (Pak) is given a baptism of fire on his incarceration; not only does he get a beating from prison big brother Roller (Tam) but also becomes a target for psychotic rival Scar who has been incentivised to make the newcomer’s life as miserable as possible. Thankfully he finds a friend in Chan, a long-term inmate who is coming to the end of his sentence. Chan has his own worries to deal with, though, and when he is refused the chance to leave the prison temporarily for his mother’s vital operation, he begins to hatch a plan to escape. Soon, Roller also joins the club after discovering that his previously thought deceased daughter is actually alive and about to get married. Yet Scar is keep an eye on the situation and begins to negotiate a piece of the action for himself.

There is something of the Golden Age of Hong Kong cinema in ‘Breakout Brothers’; it’s short, shot on a modest budget and focused on a very simple plot that doesn’t deviate from its initial set-up. Yet that’s not where the comparisons end, thankfully, as this is a surprisingly exciting and often blackly comic thriller that borrows from ‘Prison on Fire’ but does so with real skill.

An escape movie can be a thrilling genre piece if it keeps things simple, and ‘Breakout Brothers’ does just that. Nevertheless, there is solid character development and there is real enjoyment from following the character arcs. Like many prison breakout films, it’s about looking under the surface of previously unpleasant characters and understanding their story, something that is especially successful with Patrick Tam’s character. Soon there is a genuine camaraderie among the trio – vitally important if we are meant to care about their situation.

The actual escape counts for a relatively short amount of time and, as the genre dictates, things do not go quite as planned. Yet, as with the best of such films, it’s about the planning and the tense stand-offs with the suspicious authorities that makes it work – ‘Breakout Brothers’ achieves this very well. The denouement is perhaps a bit too neatly tied up to be believable, but it has built up enough good will in the preceding eighty minutes to put the viewer in a forgiving mood. A truly pleasant surprise.