‘Odyssey: a Chinese cinema season’ is currently running in the UK. The festival is a collaboration between Picturehouse Cinemas, The Prince Charles Cinema and Shift 72, creating a hybrid experience that will allow the films to reach any many people as possible across the UK and worldwide.

Named after one of the most significant works of the Western canon, ‘Odyssey’ aims to offer an exciting and mysterious journey through the contemporary Sino-cinematic world. ‘Odyssey’ strives to empower the shared appreciation of cinema, drive inclusiveness in the film industry, and facilitate cross-cultural communication. The festival not only introduces the latest young Chinese film talents to the UK audience, but also hosts panels with industry experts, scholars, and filmmakers to boost creativity and exchange ideas.

The curation of ‘Odyssey’ revolves around diverse themes and genres. The screenings range from short films and features to new moving images by contemporary Chinese artists. Demonstrating a pioneering and artistic spirit, short film programmes like ‘Shanghai Animation Film Studio Retro’ attempt to break the boundaries between narrative and aesthetics and reimagine cinematography and visual art dimensions. In the feature film section, topics like ‘Women Through Lens’ and ‘Chinese Regional Cinema’ showcase the dynamics of Chinese society, culture, and aesthetics. All screenings include a series of Q&As prepared by the curation team and special guests including filmmakers, academics, curators, and critics.

Now in its second year, and rebranded, ‘Odyssey’ has prepared another 10 new industry topics. From global sustainability to new business models, from co-production to distribution, from regional cinemas to female film programmers, all subjects are the leading visions and will help explore film-related collaborations between the UK and Greater China.

The festival programme will bring about a whole month of Chinese cinema from 10th May to 10th June 2022, with more than 60 films in 8 curated sections, 10 panel discussions, and Q&A sessions. Outstanding, innovative, and inspiring, these films promise to add some sparkle to 2022. Most of the programme will be available online for all audiences across the country, and several pop-up special cinema screenings will come up throughout the festival. The online festival platform of ‘Odyssey’ will be powered by Shift 72, a leading streaming technology that has been used by renowned international festivals such as Cannes and Toronto.

While we’re a little late to the party, there are plenty of highlights still to come. For a full list of screenings and the events taking place at ‘Odyssey’, visit ukchinafilm.com. You can also follow the UK-China Film Collab twitter and Odyssey twitter. 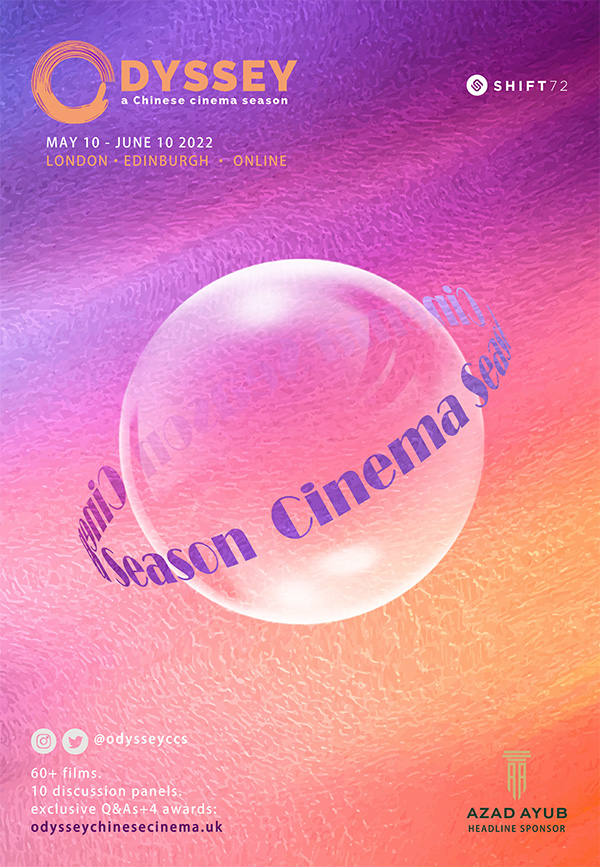