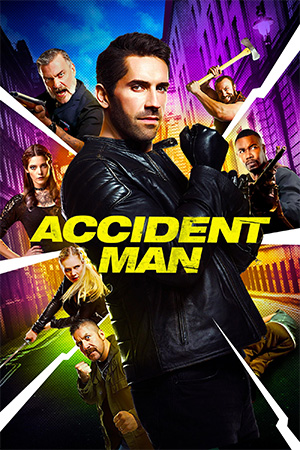 Blitzkrieging its way through bad taste, belly laughs and bust ups, ‘Accident Man’ arrives on these shores with a bang and a boatload of hype. More than living up to said hype this down and dirty comic book flick, based on the strip by Pat Mills and Tony Skinner, is a riotous mix of black humour and frenetic fight sequences.

Adkins is Mike Fallon the Accident Man, an assassin revered for his skills at making kills look like mishaps. He’s the elite killer of a group of deadly assassins, featuring awesomely monikered killers such as Jane the Ripper, Carnage Cliff, Poison Pete, and the dynamite duo Mick and Mac. Fallon soon finds himself going up against his former comrades when it turns out they’re hired to kill his ex-flame. Wholesale violence and destruction erupts in a very bawdy British way.

A passion project of star and producer Adkins every penny, punch and ounce of passion is up there on the screen. With the help of frequent collaborator Jesse Johnson (‘Savage Dog’, ‘Pit Fighter’), Adkins has put his heart and soul into the project, not to mention his considerable physical skill, to produce a blistering foul mouth comic book blast. Sticking to its sweary and sometimes seedy roots ‘Accident Man’ knuckle sandwiches the audience with a rowdy onslaught of despicable characters, fruity language and searing fight action. Never tipping over into the trying-too-hard mould the film is buoyed by a cheeky spirit with the cast obviously relishing the chance to play against type. A stellar cast of action stalwarts rip through the spiky dialogue and over-the-top shenanigans, bringing the comic book characters to life. Ray Stevenson in particular is great as the volatile Big Ray and Michael Jai White and Ray Park are loads of fun as the deadly duo Mick and Mac.

For all its deathly black humour and tough guy swagger the film never forgets it’s an action film, delivering a bevy of brutally sustained brawls. Choreographed by the great Tim Man (‘Ninja 2’, ‘Undisputed 4’), the fight action is big and brutal utilising the skills of all the fighters to barnstorming effect. Adkins cuts his way through the film and opponents with aplomb, including an epic 2-on-1 fight with Park and Jai White and a wicked fight with the talented Amy Johnston (‘Female Fight Club’). Tim Man also gets a nice crunchy 1-on-1 with Adkins, and Johnson brings edgy bite to the action giving the fights a gritty feel. It’s nice to see a comic book themed action flick doing it all for real rather than saturated in CGI madness!

Its coarse language and in-your-face attitude might not be to everyone’s taste, and some of the banter doesn’t always land but the film’s commitment to edgy comic books thrills should be applauded. ‘Accident Man’ isn’t your typical comic style movie but this makes it a refreshingly change of pace and for the most part it balances laughs and action expertly to deliver a wild Brit fight flick.