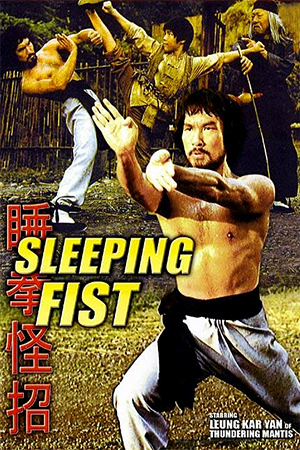 Policeman Chin (Leung Kar-Yan) is well-beaten by thugs one day in a fight that sees him hopelessly defeated. Coming to his rescue is a young lad who couples his abilities with a cocky self-assurance and who manages to take the injured man back to his master. While recovering from his wounds, Chin meets the eccentric master who trains his eager young student in a seemingly cruel fashion. When the youngster is himself injured one day after a brawl with the local bullies, the master decides to teach both of his students the bizarre kung-fu technique of the ‘Sleeping Fist’ – a style that is almost surreal in display, but very effective. After an arduous course of severe training, the trio set out to avenge the battering that the youngest received. Easily defeating their foes, the threesome find themselves up against a real challenge when an Eagle’s Claw master (Ko) is hired to tear apart the Sleeping Fist.

After the runaway success of ‘Drunken Master’, literally scores of exploitations of the same theme were churned out for a quick buck. Every one of these producers used clones of Yuen Siu Tien or, if they were fortunate, the man himself. Unfortunately some have alleged that the deluge of work that hit Yuen after ‘Drunken Master’ contributed to his death a couple of years later. Whether this is true is not something that will be debated, but there was no doubt that many of these exploitations were poor in comparison. ‘Sleeping Fist’ was one of the more watchable ones thanks to leading star Leung Kar-Yan and the highlighting of a very unusual style. Another significant strength is the presence of acrobatic kid Wong Yat Lung who strikes up a pleasing chemistry with his co-star. So much was this in evidence that they were again put together in the superior ‘Thundering Mantis’. Although it is certainly different in some areas, ‘Sleeping Fist’ suffers from a storyline that’s too formulaic; there is no attempt to add any twists or turns in the way that some films have done. Therefore it becomes easy to telegraph what will happen and even when it will happen. ‘Sleeping Fist’ is not brave enough to offer any variations on a very tired theme, but it is consistently rewarding from an action perspective. It is this that recommends this film to ardent genre fans.