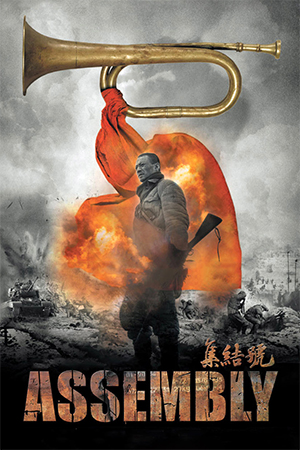 Feng Xiaogang’s ‘Assembly’ is both epically bombastic and intimately small-scale. A film of two halves, (the first full of combat and carnage, the second a personal quest for truth and recognition) Assembly may alienate some with its polar shift in approach and tone come the end of the first hour but is overall a powerful war film that captures both the brutality and intense combat of battle as well as the individual story of one man. Said man is Gu Zidi (Hanyu) the captain of a dwindling regiment of the People’s Liberation Army who are holding off the immense forces of the Nationalist Army. Determined to hold the line and prevent the capture of a valuable mine, Gu is down to only 46 men and has been told not to retreat unless he hears the assembly call: the sound of the bugle being played signalling retreat. With the men dropping fast and desperation taking its toll they tell Gu they have heard the assembly call and must retreat. However, Gu cannot be certain the call has been made and continues fighting until he is the only one left. Upon his recuperation he learns that his men have been unaccounted for and are therefore seen as deserters. Outraged, Gu is determined to set the record straight and let the true story be told.

From the incredible production design, cinematography and excellent use of locations ‘Assembly’ is an impeccably well made film and often beautiful to look at. Not so much in that it is like a stunning painting (like Xiaogang’s previous film ‘The Banquet’ was) but from the level of detail and authenticity poured into ever frame.  The recreation of wartime and the battle field is hard to fault totally immersing the viewer into the time period and onto the battleground. The scenes of combat, as many other reviews and the trailers will attest to, that fill the first hour or so of the film are absolutely stunning. Taking a stylistic cue from ‘Band of Brothers’ and ‘Saving Private Ryan’, the battle scenes are chaotic, bloody, unpredictable and a visual spectacle. Not shying away from the gory brute force of warfare the battle sequences don’t hold back from showing what happens to the human body when in the midst of combat: especially when facing a squad of tanks. From the intense sequence set in a bombed out city that opens the film to a scene where the outnumbered ward off the aforementioned tanks, the combat ‘Assembly’ shoves at the viewer is at once spectacular and harrowing.

While the numerous battles that take up much of the first half of the film will please war combat enthusiasts, ‘Assembly’ has a lot more to say than just how devastating war carnage is and how thrilling it can be to watch in the context of a film. The impressive battles help to show the hell Gu and his men went through and how important it is that they must be recognised for their efforts. Despite being set some years later and featuring very little war combat the second half of the film feels just as intense as the first half as Gu does everything in his power to get his men recognised as he attempts to adapt back to civilian life. Avoiding the melodrama the film could have so easily slipped into, Gu’s story is rendered touching and believable thanks to Xiaogang’s assured direction and the incredible performance from Zhang Hanyu who really gives it his all as the ever determined Gu. It’s a powerful performance that is never grandstanding but emotional and makes you really care for Gu and his plight.

Mercifully steering clear of jingoistic flag waving (for the most part), ‘Assembly’ instead focuses on the story of a few men and their courageousness. A personal story told on a grand scale ‘Assembly’ is as good as war flicks get, finding a near perfect balance between a personal journey and large scale combat.