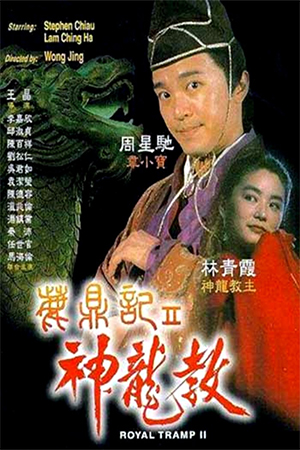 ‘Royal Tramp II’ starts almost exactly where the original finished, with the continuing misadventures of Wei Shew Bao following his involvement in palace intrigues. After foiling the plans of the various groups who were determined to have a hand in regal affairs, Wei now finds himself the target of significant opposition. One such enemy (Cheung Man) who had been foiled in her plan to impersonate the Queen Mother now swears revenge and also promises she will not be recognised when she returns. So it is as the delectable warrior now accepts a renewed form (Lin) and is entrusted with the task of making sure a friend of her clan attains the throne. Meanwhile, now presiding over his own district, Wei aka ‘Duke of Mount Deer’ sees the disturbances of the past return when he again becomes embroiled in the actions of the rebel factions. Added to this is the attention of old allies and new threats to the throne. The cowardly duke manages to talk his way out of trouble, while playing each side off against the other. The most surprising twist comes with some of the new allies and even lovers that Wei amasses along the way. By the end of the film, the royal family is saved and Wei Shew Bao has several beautiful wives to his name.

The directorial excess that Wong Jing barely managed to restrain in the original finally spills over in this disjointed sequel. Instead of taking the strong elements from the first and galvanising them for the second, Wong loses control of his project and allows the overall rhythm to be sacrificed. ‘Royal Tramp’ managed to juggle the broad comedy, multi-layered plot and action sequences with eventual success, this follow-up, however, simply doesn’t have the same cohesion on offer. The choreography and abundant action is once again highly impressive and a notable reason for watching, though attached to an uninvolving and confusing story it lacks the necessary excitement. ‘Royal Tramp II’ does have the kind of cast that fans will really appreciate, with the teaming of Brigitte Lin and Stephen Chow offering some very enjoyable interaction; Lin is typically serious and deadly whereas Chow mocks the very conventions of heroism by hiding from any dangers. Unfortunately the cast contains Wong Jing regular Natalis Chan who provides many of the most annoying moments. In the previous episode he was fairly restrained, but here he dominates the screen with a few particularly wearisome routines that dredge up the director’s trademark ‘humour’.

Though this is an uninspiring conclusion to the ‘Duke of Mount Deer’ story, it at least ties up many of the loose ends. For this reason and taken on the understanding that it is flawed film-making, ‘Royal Tramp II’ should be watched by those who enjoyed the first part. Part two is lavish and colourful, but simply not as absorbing as it needed to be. A steadier hand at the helm may have rectified this.