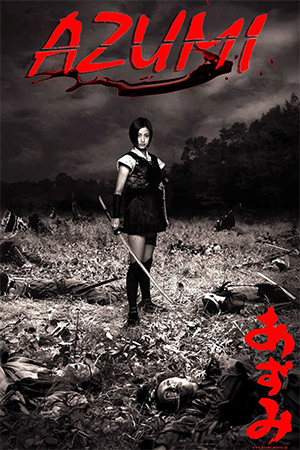 High up in the mountains, an ancient master trains several young men and one woman in the deadly art of the assassin.  Their mission is to prevent a civil war that may ensue thanks to three rebellious lords who each harness aspirations of overthrowing the current leaders.  As the assassins undertake their mission, it’s clear that the one girl who goes by the name Azumi is the most skilled in the sword thanks to her awesome speed.  However, after quickly dispatching of the first target, doubts begin to settle in amongst the group as even if this is the task they have trained all their lives for, one has to wonder whether what they are doing is right.  When one of the lords uncovers their plans though, he sends his own men after the assassins and as far as you try and run from your past, one knows that it will always catch up on you.  Now it’s up to Azumi and her friends to decide whether to keep running or turn and face the enemy so they may fulfil their duties to their master even if it does mean untold bloodshed.

Being a fan of Ryuhei Kitamura’s ‘Versus’, I have to admit I feared the worst from his follow-up project ‘Azumi’.  Aside from the obvious tendency for a successful director to over-use his previous tricks, there was also the hurdle of exploring a different genre to overcome.  Thankfully though,’ Azumi’ soon put all my fears to rest as not only is this an extremely competent fantasy-action adventure, but it is also littered with more examples of Kitamura’s interesting camera techniques that made ‘Versus’ so satisfying.  ‘Azumi’ works best on a much larger scale though, with it’s epic feel and atmospheric locales placing it head and shoulders above the majority of other female swordplay flicks of recent times (such as the mediocre ‘Princess Blade’).  However, the real praise here belongs to Kitamura’s approach to character exploration.  Although Azumi is supposedly the main focus of the piece, it’s interesting to note that her role is very subdued and she actually plays out the story on the outskirts until the film’s finale.  During this time, Kitamura manages to flirt with each of the other players who are made up of some larger-than-life personas that always keep it interesting.  Combined with this, Kitamura also has a keen eye for storytelling, keeping the pace fast moving and never overdoing his camera tricks but inserting them just at the right moment so as to keep a fresh slant on each particular scene.

The swordplay within ‘Azumi’ is always to the forefront and a major factor from the very beginning.  There are numerous battles throughout, all littered with extremely bloody results but the action is never on the same level as ‘Versus’.  There is no room here for flashy martial arts or even intricate swordplay, in fact this is a very minimalist return to the classic Samurai pictures of the past with most combat sequences fairly short lived but still very enthralling and hard hitting.  The current trend with sword fights in movies is to litter it with CGI manoeuvres and bizarre dispersion of blood but ‘Azumi’ never goes down this track.  Although it’s clear some CGI enhancement is used, it never becomes overly apparent except when used to show a particularly flashy execution of one of the main characters but even then it is delicately inter-woven.  The one thing that did strike me as somewhat strange though is that Azumi herself doesn’t appear particularly skilled with the blade, rarely showing off any skills outside that of a laymen until the finale.  This slight oversight seems to make it hard to believe she is the incredible swordswoman that she is portrayed as, although a few nifty special effects do help to represent her extraordinary speed.  Still, this is only one minor gripe in an otherwise enjoyable semi-epic.

Those of you who expect ‘Azumi’ to deliver on the same level as ‘Versus’ maybe disappointed, but if you take it on a whole new level then you will find that this is every bit as entertaining.  It may be a different genre but Kitamura proves he is not just a one trick pony and still knows how to successfully shoot the action and keep the characters interesting throughout.  If he continues in this vein, then Kitamura is certainly one director that is worth keeping your eye on.