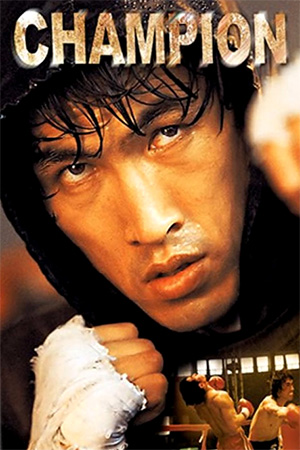 Slick and often touching, ‘Champion’ may on surface be a run of the mill biopic but underneath it has enough heart and some riveting performances to make it more than just a bio movie and certainly worth a watch. The flick tells the story of the rise and untimely death of one of Korea’s greatest sporting heroes, boxer Kim Deuk-gu (Yu Oh-seong). Escaping a lowly life he overcomes adversity and some of his own ineptitude to become Korean National Heavyweight Champion and take on Ray “Boom Boom” Mancini at Caesar’s Palace in Las Vegas. Along the way he makes new friends, finds fame, learns about himself and finds the love of his life.

So yeah, pretty standard biopic stuff based on real life events. We certainly have an underdog to cheer for as Kim Deuk-gu starts off dirt poor and happens on boxing purely by chance, realising quickly that he has a gift for it. First he has to overcome a strict trainer, his own bullheadedness and lose a few fights before he eventually starts winning fight after fight. Cue several exciting training and fighting montages as Kim Deuk-gu makes short work of his opponents. The second half of the film switches focus to his relationship with Lee Kyeong-mi (Chae Min-seo), his future wife. Arguably these are the film’s best scenes, the two having a very touching relationship despite Kim Deuk-gu’s initial over eagerness and the two actors share good chemistry.

Now the narrative is all fairly predictable and climaxes with the exhilarating Las Vegas set show down. Yet, despite the biopic trappings and the overuse of intrusive music and songs it’s the cast that really shine. The film actually focuses on Kim Deuk-gu as a person and his relationships with people rather than boxing per se. There are still some thrilling fights, though most are short, sharp and sweet. What we get are some great performances not least from the two leads. Oh-seong Yu as Kim Deuk-gu immerses himself in the role, first playing Kim Deuk-gu as the hapless innocent he is before subtly turning him into the confident fighter he becomes. Equally Chae Min-seo is just as good, also somewhat of an innocent who just happens to fall in love with a boxer. Her discovery of and subsequent breakdown at Kim Deuk-gu’s fate is a heartbreakingly emotional scene with the actress totally inhabiting the soul of a broken heart. Also, try and not shed a tear at said scene, something that is almost impossible. The two actors also share several other touching and intimate scenes that remind us that these were real people experiencing real emotion.

Overall, an entertaining if hardly revolutionary piece of sports bio, ‘Champion’ benefits from some fine photography, a commitment to do the subject proud and some excellent performances from the cast.