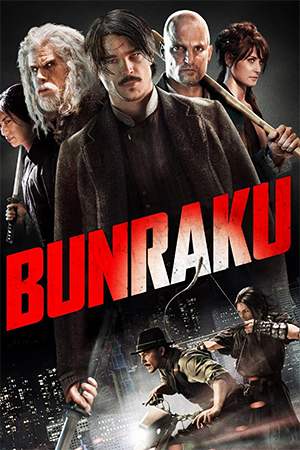 Part Western, part Samurai tale and part comic book styling, ‘Bunraku’ (taking its name from a form of Japanese puppet theatre) fuses all the above into a unique and eye popping whole but unfortunately can’t quite sustain its momentum and interest for the almost 2 hour run time. It’s a fairly straightforward tale of a Drifter (Hartnett), a Samurai (Gackt) and (with a little help from) a Bartender (Harrelson) joining forces to rid a town of a deadly mob boss (Pearlman) and his gang of assassins. In a world without guns the protagonists must use a variation of their fists and blades to fight one another and director Guy Moshe frames it all in a heightened comic book styled setting.

‘Bunraku’ is certainly unique in its style and approach to a well worn story/set up. The look of the film (perhaps most easily compared to ‘Sin City’: but in colour) is certainly visually distinctive and pleasing. The production design is often remarkable and kudos to the filmmakers for building many of the unique sets on sounds stages (to create a living breathing world for the characters to live in) and not resorting to constant green screen/CGI. There is some of that to enhance certain environments but the actual constructed sets are often a marvel to behold. This, in part, gives the film its own distinct vibe, that a game cast all seem to embrace. Harrelson is great as ever, Hartnett is a solid (if a rather too subdued) leading man and there is great support from the likes of Demi Moore and Japanese actor Shun Sugata (‘Ichi the Killer’, ‘Alive’, ‘Kill Bill’). Yet the standouts are Kevin McKidd and Gackt as a ruthless killer and a samurai respectively. McKidd is all menace and fight while Gackt gives the film the heart and soul it needs in amongst all the visual flair and violent action.

While the flick doesn’t have to rush through its story in 80 minutes it is perhaps rather dragged out over the 2 hour runtime. Proceedings loose a sense of urgency, that even all the cool visual tricks and stylings can’t compensate for,  and while it’s noble that Moshe is taking time to world build one may become frustrated that events take a little too long to get where they need to go. There is also perhaps one too many characters introduced clogging up events (but again adding to the rich world the filmmakers are attempting to build) and, unfortunately, the great Ron Pearlman is rather wasted as the main bad guy. Considering he is built up as a towering ruthless threat, we never really get to see him fight (McKidd as his right hand man does all this and thus comes off as more of a danger to the heroes). Instead Pearlman spends his time giving lengthy speeches, cracking walnuts and sometimes wearing a rather unfortunate and not very threatening looking hat!

Despite the dips into lethargy, Moshe doesn’t forget to bring the fight action and brings a fair bit of it to the plate: not least in the last 25 minutes or so. The fights and their choreography are actually pretty good. Yes, they’re mainly performed by actors who are not known for their fight skills but fight coordinator Larnell Stovall (‘Undisputed 3’) makes the actors look good and the fights are certainly creative and well shot/edited for the most part. Stovall even has a nice bit part where he gets to showcase some of his own fight skills.

While its uniqueness may not be for all, ‘Bunraku’ wears its quest for originality proudly on its sleeve and for the most part succeeds at offering a different take on an old Western/Samurai style set up.