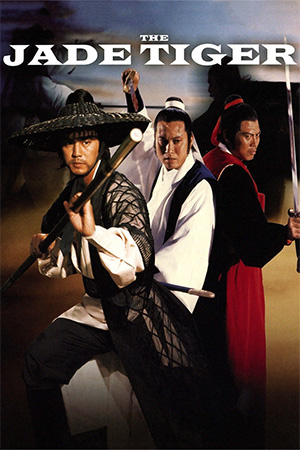 If the David Chiang/Ti Lung/Chang Cheh’s partnership is known as the ‘Iron Triangle’, there should surely be a similar term for the triumvirate of Ti Lung, Chor Yuen and Gu Long. The combination of star, director and writer have produced some popular hits while also having a unique stamp that reminds the viewer that the film is a definite work of the three. ‘The Jade Tiger’ is another labyrinthine kung fu mystery that plunges the viewer into the world of martial rivalry and subterfuge.

Just as he is about to marry his sweetheart, Zhao Wuji is informed that his father – who is the head of Dafeng Hall’s clan – has been murdered. Rushing over to the scene of the crime, Zhao is traumatised by the sight of his father’s corpse and cancels his marriage, instead concentrating his efforts on revenge. The prime suspect for the murder is a master swordsman who has fled to the sworn enemies of the Zhao’s family in order to seek refuge. These enemies, the Tang Clan, decide to send out their top fighters to stop Zhao Wuji before he has any chance to carry out his act of vengeance. However, Zhao is rescued on more than one occasion by various ‘friends’ with their own unusual motives. He quickly appreciates the magnitude of defeating the Tang Clan and so decides to infiltrate the family, adopting the name Shangguan Ren to achieve his goal. As he gets closer to the truth, Zhao is surprised to learn that his father’s murderer is not the heinous villain he was lead to believe and it is only by trusting him that he will destroy the ambitious Tangs.

When sitting down to watch a Chor Yuen adaptation of a Gu Long novel, it is to be expected that the viewer may get sucked into the confusing whirlwind of double-crosses and triple-crosses; the fact that, most of the time, Chor Yuen pulls off the these betrayal with panache helps this no end. Unfortunately, ‘Jade Tiger’ takes the usual plot twists to an all-time apex of confusion and bewilderment. The narrative starts promisingly, developing gradually into the kind of mystery that is essential to a Chor Yuen film while also throwing the usual eccentrics into the blend. However, this interest is short-lived as the constant barrage of motives and characterisms begin to verge on self-parody. By the final thirty minutes, ‘Jade Tiger’ gets lost in its own  plot twists while many of the lead players begin to lose most of their emotional punch as the film unravels. Chor Yuen’s usual meticulous control is found wanting with ‘Jade Tiger’ – there’s just too much disorder here to make it a fully worthwhile production.

‘Jade Tiger’ does have some assets to rely on in its weakest moments. Ti Lung, at his best, was one of the best straight actors in the Shaw Brothers’ stable; while his performance here may not be on the same level as his very finest moments, he is always a leading man of great value. Alongside Ti Lung are performers such as Yueh Hua, Lily Li and Ku Feng in solid supporting roles, while Lo Lieh steals the film as the arch-villain of the piece. Chor Yuen still bathes the picture with his extraordinary visual splendour, filling the frame with rich colours and superior set design. With these areas enjoying guaranteed quality, it is clear that this is a film that does retain much of its superior elements. It’s unfortunate that such a visually vibrant production lacks so much substance.

Among the multitude of collaborations between Chor Yuen, Ti Lung and Gu Long, ‘Jade Tiger’ is one of the least memorable efforts. With far too much interest in the twists of the storyline and too little in creating a film the viewer can care about, Chor Yuen belies his real talent as a director. Even fans of the convoluted martial world of the swordplay genre may find ‘Jade Tiger’ a tiresome 90 minutes.