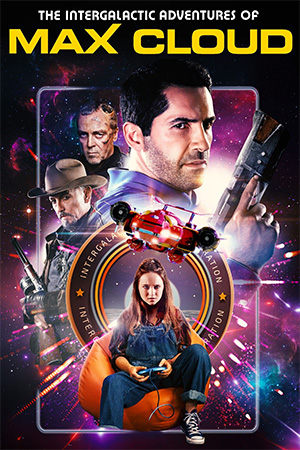 It’s retro day-glow, videogame inspired, sci-fi fun in ‘The Intergalactic Adventures of Max Cloud’, a homage to video games of yesterday and a showcase for action star Scott Adkins to flex his comedy muscles.

It’s 1990 (ah, halcyon days!) and ‘The Intergalactic Adventures of Max Cloud’ is one of the best videogames going. A retro, side-ways scrolling, 16-bit (read: best kind) video game that sees Max Cloud (Adkins) and his crew of space adventurers battling evil across the universe. It’s the favourite game of Sarah (Isabelle Allen) who despite her dad’s objections at playing the game, finds herself sucked into the game and embodying the character of Jake (Elliot James Langridge). It’s then up to Sarah’s buddy Cowboy (Franz Drameh) to take control and navigate Sarah/Jake through Max Cloud’s latest adventure, which sees him and the crew crash land on the planet of Heinous and do battle with space ninjas (yes, space ninjas!) and the evil galactic warlord The Revenger (John Hannah).

From the get-go, ‘Max Cloud’ wears its sense of retro fun proudly on its sleeve and while it can’t always keep up with its ambitions, this is a lot of creative, action-packed, silly fun. The slick visual style to create the video game world is well realised and sets the tone: bright bubble-gum sheen that enhances the videogame/comic book stylings. Likewise, everything is played full tilt with characters over-the-top, fake American accents through the roof, and action enhanced to highlight videogames of the 1990s. Played a little like an old Saturday morning cartoon or an episode of ‘Power Rangers’ (complete with over-the-top bad costumes and hamming it up!) this all adds to the sense of fun and it’s obvious the makers have a lot of nostalgic love for videogames and silly entertainment from the 80s/90s.

While everyone is game and certainly embraces the over-the-top nature of proceedings and the makers have crafted a groovy 1990s videogame world, the film suffers from an energy lag in the mid-section, lacking the momentum and peppiness this type of flick needs. While the movie has scope its resources don’t always reach it as sets are limited to the same 2 or 3 and when the action gets too big/contains too many cool looking creatures it reverts to showing it through the video game Cowboy is playing (meaning we’re denied a cool fight scene with a multi-armed alien!). However, creativity is always on show and the cast for the most part fully embrace the bonkers nature of proceedings. John Hannah and Lashana Lynch are on fine villain hamming form, Elliot James Langridge does well as the avatar possessed player and Adkins all but steals the show as the full-of-himself hero. He’s got a knack for comedy, sends up his tough-guy-hero persona well and keeps everything propelling along with well-timed comedy and high-kicks.

Yep, Adkins still gets to cut loose in some cool fight scenes (with those aforementioned pesky space ninjas: should have been more fights with them!) and there is a surprisingly high gore quota. ‘Max Cloud’ will no doubt divide those into the either love it or hate it camps (and the tone does confusingly sway from not really being for kids but not really being for adults either!) but those willing to give it a chance will find a lot to enjoy. Plus, anything that celebrates old-school, 90s, 16-bit, scrolling videogames (and features Stan Bush’s ‘Dare’) gets a thumbs up from this two-bit reviewer.