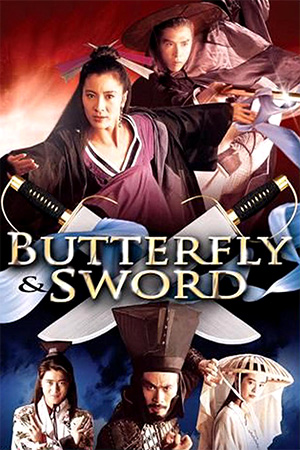 Jettisoning all rhyme and reason from the get-go, ‘Butterfly and Sword’ is a full-on creative splurge from director Michael Mak Dong-Git and action supervisor Ching Siu-Tung: as what the plot lacks in subtly and coherency it more than make up for with abundant inventive action. Yeoh, Yen and Leung play a trio of fighters who grew up together learning to stay alive and become expert fighters. Their talents are in demand when they’re recruited by a seemingly ill of health Lord to retrieve a letter that contains information about an impending attack from his sworn enemy. However, Leung is leading the quiet life all loved up with Joey Wong, who would rather he didn’t set off on another dangerous mission. Yet, he does, and as the three fighters are reunited, past feelings soon arise: Yeoh loves Leung, where as Yen is in love Yeoh and Leung now only has eyes for Joey Wong. Phew! So, lots of complex plot love connections ensue all the while the group of fighters attempt to complete their mission.

To be honest, it’s a mission to accurately sum up what goes on in ‘Butterfly and Sword’ as the melodrama often sits at odds with all the violent wuxia action and the pace is so jet propelled it’s hard to keep up. In many ways, the frantic pace is a blessing as the love connections are just too trite (nothing wrong with a romantic sub-plot but it is rendered rather tedious here!) and only gets in the way of all the creative action and design. If you’re one who only digs more grounded, one-on-one martial arts action then you may want to look away, but fans of wuxia action are in for a treat. Other than when the characters are sitting around discussing their feelings for one another (and not even all the time then!) there is rarely a scene where they aren’t flying, jumping and spinning through the air. Ching Siu-Tung and his team crank up the flight-of-fancy action here with eye-popping action scenes that feature all characters constantly whizzing through the air; rapid-fire swordplay; bodies exploding at a single strike; limbs constantly severed; football-fu (!) and in once particularly crazy sequence, a human bow and arrow (!!).

For fans of the genre it’s great stuff and while it’s certainly OTT and often goes by in such a flurry it’s hard to decipher what just happened, it’s incredibly inventive and a reminder of how everything was done for real, no matter how crazy, back in the day. ‘Butterfly and Sword’ has a certain nostalgic feel in that all the elaborate action was pretty much done for real: complex, high-flying and with what appears to be hundreds of set-ups (even in the simplest scenes!) it’s impressive stuff. If made today, it would be CGI’d to hell!

With a dark tone, ample gore and some nifty guerrilla style shooting, ‘Butterfly and Sword’ is a little edgier than some of its ilk and if one gets past the dreary melodrama and flummoxing plot, there’s a lot to enjoy.