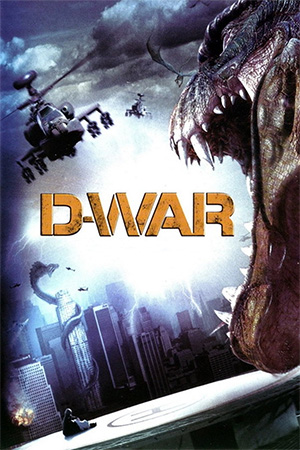 According to a Korean legend, every five hundred years a young woman is born who possesses a spirit power that can turn a serpent into the mightiest dragon. A good serpent will use this power to protect the universe while an evil serpent will use it to destroy the world. In present day Los Angeles, reporter Ethan Kendrick is called into investigate a mysterious event and is suddenly reminded of a tale he was told as a child. According to the story, he is destined to find and protect a woman who is responsible for bestowing the dragon power on one of the serpents. Although it made little sense to him at the time, Ethan suddenly understands its meaning and is drawn to seek out a girl by the name of Sarah Daniels. Unfortunately for him, this is exactly the same moment as the evil serpent awakens and now he must fight to protect Sarah and destroy this threat to all of humanity.

While it may have a strong South Korean influence behind the camera, it’s clear that ‘D-War’ shares far more in common with some of the current soulless Hollywood blockbusters. The so-called re-telling of a Korean legend is practically an insult to our intelligence and the little characterisation we get is absolutely wafer thin. Most of the actors also seem to have been plucked right out of the ‘Days of Our Lives’ reject bin, and there are some truly cringeworthy interactions that will have you reaching for the sick bag time and time again. Now, I appreciate there are occasions when a formula such as this can churn out a “so bad it’s good” movie, but ‘D-War’ is definitely one of those films that is just plain bad.

The only slight redemption to be found in ‘D-War’ comes in the special effects. Well, perhaps that would be the case if the majority of it wasn’t wasted on just following the snake around as it takes some kind of extended sightseeing tour. In fact, it isn’t until the last fifteen minutes that we actually get to see a solid use of the CGI as the army take on the snake atop a skyscraper and there’s some hot snake-on-snake action. It’s scenes like these that actually show a small amount of promise and it’s a shame that director Hyung didn’t spend more time on the snake battles instead of the pathetic excuse for a love story.

I’m normally a sucker for a cheesy monster movie but ‘D-War’ fails to produce the goods on just about every level. It does earn itself an extra half star for the action-packed finale but unlike the millions that inexplicably line up to see Michael Bay movies, I need more than flashing lights and explosions to keep me amused.