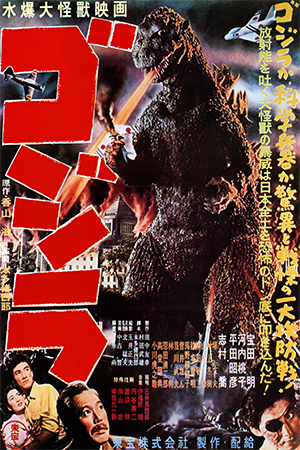 The original and still arguably the best Kaiju movie, it’s hard to believe ‘Godzilla’ was released way back in 1954 and in black and white no less. Despite being made over half a decade ago and the effects considerably low tech by today’s standards, ‘Godzilla’ is still an ace monster movie and a dark tale of weird things coming out of the sea to wreck havoc on land.

Ships are mysteriously exploding and sinking off the coast of Japan. Experts and scientists types at first believe it to be underwater mines or volcanic activity but soon it seems something more sinister is at play. Surviving sailors talk of something coming out of the water to destroy the ships and when a community on Odo island is destroyed and several of its inhabitants killed, it appears something has come ashore, and is destroying anything in its path. Elders talk of Godzilla, a giant, 164 foot tall monster long lay dormant on the ocean floor but stirred awake from nuclear testing and now on the rampage.

The great thing about the original ‘Godzilla’ is how eerie and unsettling a tone it has. The black and white photography adds to this greatly but the matter-of-fact like manner the way the film is presented and acted give the film a darker vibe. Many claim the whole thing is a warning against the repercussions of nuclear testing and on one level it certainly feels this way. No it isn’t a serious documentary, this is still a monster movie, but Godzilla himself is born of nuclear testing and as a result takes violent retribution on us humans. He’s a scary Godzilla too, often darkly silhouetted with glowing eyes and radioactive breath which appears as a sort of mist which sets poor victims on fire. Yikes! Creepy, ghoulish monster mayhem.

Godzilla is a non-stop rampaging force of nature, as if he is part of earth itself come to life to take revenge on us puny humans for scorching the planet with our bombs and missiles. Which means there is still a high quota of destruction with the big G ultimately laying waste to Tokyo. Model cities and vehicles are destroyed by a man in a big rubber suit and it’s all great stuff. The cast is excellent too, more character on show here than in the later sequels with Akihiko Hirata on particular good form as the eye patch wearing Dr. Serizawa.

In the Kaiju genre, ‘Godzilla’ is a stone cold classic. The original monster movie is still a dark delight and essential viewing for anyone into Kaiju movies or Japanese cinema.