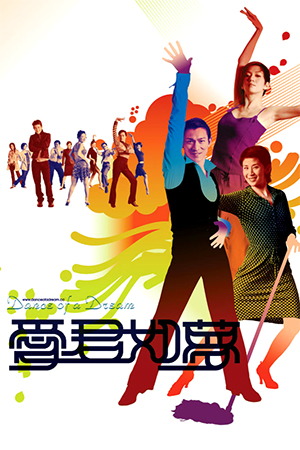 The name Andrew Lau tends to divide many Hong Kong film fanatics into two camps. The first hold him responsible for the loss of what makes Hong Kong cinema unique, with his big-budget, style over substance flicks allegedly killing the originality of the local industry. The second camp tends to be more forgiving and they welcome the chance for Eastern films to battle successfully against Hollywood imports. These viewpoints are just for his directorial work; arguably his cinematography is his major strength and the reason he has so many awards under his belt. The end of 2001 saw Lau don both hats once more and present viewers with ‘Dance Of A Dream’, a change from his usual CGI-dominated productions (one of which, ‘Avenging Fist’ played cinemas at the same time).

Namson Lau (Andy Lau) is the stylish and suave dance instructor who owns an ailing dance studio that is looking for new pupils. During one spectacular performance at a swanky reception, Namson attracts the attention of waitress Kim who quickly develops a crush on the elegant mover. After enrolling in Lau’s classes following a session of charm from the instructor, Kim sets her sights on mastering the art and winning her man. Competition arrives in the shape of an uptight businesswoman (Mui) who joins the class after persuasion from her younger brother. Lau is offered a considerable financial incentive by the younger brother if he can make his constantly miserable sister happy; the offer is simply too good to be true and the instructor uses all of his charm on the newcomer. With his class making gradual progress and his dream of owning a plush new studio drawing closer, Lau is oblivious to the feelings of those around him. Matters become confused when he discovers Kim’s crush and the feelings of his students when news of his ambitions come to light. Therefore Lau is torn between his own dreams and the well-being of his class.

‘Dance Of A Dream’ is an enjoyable, yet forgettable romantic comedy that is an amble display of the good and the bad of Andrew Lau as director. On a positive note, Lau assembles a top-notch trio of stars who play off one another with effortless skill; although pretty much playing to their respective types, Lau, Ng and Mui all give strong performances that ooze star quality. It’s also a pleasant change from the usual effects-laden fare and Lau makes sure the whole thing moves along at a fairly brisk pace. Added to this is Lau’s cinematography which, as is to be expected from someone with such a great reputation, is smooth and assured. Unfortunately for all the style of the film there is not much substance and ‘Dance Of A Dream’ tends to magnify the inadequacies that Lau shows in his direction. The romantic elements of the plot, which would seem to be the thrust of the storyline at the beginning, lacks focus and creates conflicts that are never really resolved. Within this fault is the presence of weaker-written background characters who flit in and out of the duration with little purpose or impact. Eventually, Lau appears to realise that the film has lost its drive and tries to re-introduce the romance at the end, but instead creates a confusing blend. Importantly then, these faults mean that the goals of the production are not achieved.

There are enough good points to mean that ‘Dance Of A Dream’ is never a chore to sit through, but it offers little beyond superficial entertainment.