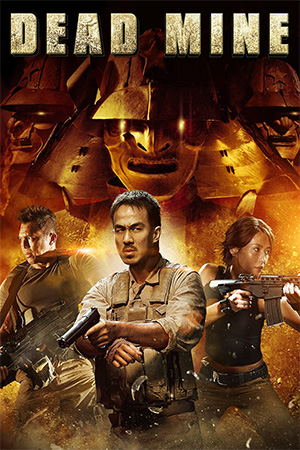 This Indonesian B-movie horror never quite lives up to its awesome high-concept (explorers trapped in an abandoned mine with genetically altered WW2 Samurai super-soldiers: cool!) but has enough going for it to make it a swift, slick shocker. The film wastes little time getting going, as it sees a rag-tag bunch of explorers (usual mix of guides, scientists, heavily armed mercenaries and obligatory money hungry douche-bags), descend into an abandoned mine deep within the Indonesian jungle. Said mine was once home to the twisted experiments of the Japanese military circa WW2 and no sooner has the troop discovered the deserted laboratory (and seemingly endless caves) than they are stalked and slayed by various experiments gone wrong.

So far, so B-movie and not a million miles away from any other explorers/soldiers-trapped-in-an-underground-bunker-being-picked-off-one-by-one horror flick. However, despite feelings of familiarity, for its-under-90-minute-runtime ‘Dead Mine’ manages to be a fun, albeit silly, genre movie. The Indonesian setting and cast give the film a refreshing hook and while some of the mine dwelling creatures smack a little too much of ‘The Descent’, the Samurai soldiers that are unleashed come the finale are certainly unique and imposing. The film really comes alive once these monsters are unleashed and provide some striking visuals and kills but unfortunately they’re just not used enough. The film is perhaps a little too talky and po-faced for this type of high-concept B-movie, the pace a little sluggish when it should be ramping up the crazy.

Still, director Steven Sheil (who broke out with sick Brit horror hit, ‘Mum & Dad’) coats proceedings in a slick sheen, wrings some tension out of the cramped confines and the cave/laboratory sets are certainly impressive for this type of B-movie. If the vibe was just a little less serious and the pace a little punchier, ‘Dead Mine’ may have broke out as a B-movie hit. Still, with its impressive visuals, crazy concept (it can’t be expressed enough how cool genetically engineered Samurai super soldiers are!) and enough action and gore to see it through to its all too abrupt ending (!), ‘Dead Mine’ (despite what the rest of internet may tell you!) is a fun little folks-trapped-underground-being-hunted-by mutated-horrors flick.