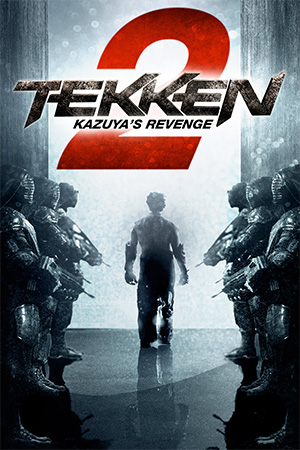 The first ‘Tekken’ live action film was a fun ride. Sure it has its flaws, mainly too much rapid fire editing, but it was decently produced, well cast and delivered just enough fast and furious fight action. This sort of sequel/prequel has its moments also but is nowhere near as fun, is often confusing and unfortunately feels like a half arsed attempt to cash in on the first flick. Kazuya (Kosugi – replacing Ian Anthony Dale from the previous film) wakes up in a hotel room with no memory. Seconds later heavily armed soldiers burst through his door and a fight breaks out. Overpowered and captured, Kazuya is taken before a mysterious figure called The Minister (Serbedzija) who claims he is attempting to rid the world of sinners but has really only kidnapped Kazuya to utilise him as a deadly assassin. A few fights and kills later, Kazuya realises this and with the help of a hot babe and Tekken alum Bryan Fury (Daniels) sets out to kick some ass.

That overview makes ‘Tekken 2’ sound like a potentially decent action flick and in some ways it is but by removing the fight tournament aspect of the original film (and video game series) this sequel never really feels like a Tekken film. Sure there are a few returning characters, including a glorified cameo from the great Cary-Hiroyuki Tagawa, but ‘Tekken 2’ rarely feels like it’s set in the same universe as ‘Tekken’ (despite some rehashed shots used from the first film). While Serbedzija is a great actor his Minister character just feels like a well worn plot device that has been done to death and Kazuya spends just far too much time wandering, moping or doing both in what feels like an attempt to stretch out the runtime.

However, the film is saved somewhat by a decent cast of action stars and some crisply choreographed fight scenes. Kane Kosugi, while not given much to do here other than mope, is a very gifted screen fighter and gets to strut his stuff in several energetic fights scenes. Choreographed by Brahim Achabbakhe (who also pops up in the cast), the fights are crisp and crunchy and liven up the otherwise dull narrative. The fight action takes a dip in the middle but climaxes in a nice finale where Kazuya takes on two deadly opponents and good to see the likes of Ron Smoorenburg getting to flex his kicking skills and Gary Daniels back again as Bryan Fury, even if his role is also just a glorified cameo.

Shame this couldn’t build on the fun of the first film but the odd mix of leaden storytelling and fast action makes this sequel a bit of a mish-mash and a missed opportunity to turn ‘Tekken’ into a cool fight tournament action franchise.