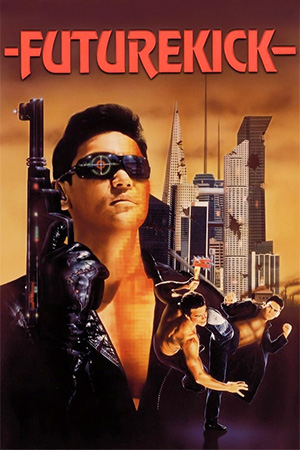 Back in the early 1990s kickboxing, cyborgs and Don ‘The Dragon’ Wilson were all the rage, with video store shelves clogged with many a movie featuring at least one of them. ‘Future Kick’ (thankfully!) combines all three and is a weird, low budget, and if you can go with it, fun slice of kickboxing fun. No really!

The Dragon plays Walker, a Cyberon (cyborg law enforcer) in the war-ravaged future of 2025! He and the Cyberons were so good at enforcing the law, the corrupt corporation’s that created them had to create another police unit to hunt them down to save being busted by their own cyborg cops. Walker is one of the remaining few eeking out an existence as a bounty hunter. Meanwhile, Meg Foster’s hubby has created as powerful new VR system for people to live out their wildest fantasies (think Total Recall!) but gets himself killed after, well, basically bragging about it too much. Thus, this leads her to Walker (after much convolution!) who she enlists to help track down her husband’s killer. Cue mucho outdated “future” tech, a surprising amount of gore, not to mention endless scenes set in a strip club (to boost the nudity factor!), a groovy cyberpunk vibe and, well, a heap of kickboxing action.

‘Future Kick’ crams a lot into its barely 70-minute runtime (and feels like it’s been edited down from a longer running time!) and has ambitions far beyond it’s typical 90s-Roger-Corman-produced-low- budget, but damnit if it doesn’t try! A little bit ‘Terminator’, a whole lot of ‘Total Recall’ and very much a Don Wilson movie of the era, ‘Future Kick’ can often feel disjointed and confusing (as it tries to balance being about four different kinds of films at once!), a little slow paced (despite the short runtime), yet still manages to be a heap of fun. Well, it is if you’re into B-movies, Don Wilson and 90s kickboxing movies! Which this two-bit reviewer is, meaning I thought Future Kick was some fun kickboxing themed good times.

Sure, the budget is low, but the makers do manage to scrounge up a cool cyberpunk vibe. Don Wilson is on good form (though Meg Foster is really the star!) and gets to strut his stuff in a few crunchy, punchy, round housing fight scenes including a brutal face off with Chris Penn (!) come the finale. It’s also surprisingly gory with some brutal kills and even manages a unique ending which is either brilliant or infuriating depending on your take (or if you made it through to the end!). Today’s audience may not get a lot out of it (and would no doubt tear it apart!) but if you’re a fan of The Dragon, sci-fi, kickboxing action and retro (not to mention barmy!) B-movies from the 90s then ‘Future Kick’ is a blast.