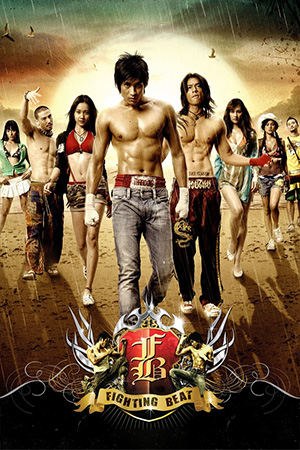 With ‘Ong Bak’ pretty much bringing Thai action cinema to the world’s attention and opening the floodgates for other efforts from a country that seems to love its bone crunching action, it was inevitable that sub par efforts would eventually creep in as the demand for Muay Thai action needed to be met. Ok, so ‘FB: Fighting Beat’ (a completely inappropriate title if there ever was one) isn’t that bad but it’s just been done so much better before and nothing no fight film fan hasn’t seen a million times.

A bunch of good looking, impossibly six-packed young Thai’s make a living taking tourists on diving trips during the day and working in a local bar at night pretending to be crap at Muay Thai so drunk foreigners can win at fighting and think they’re awesome. After some easy going set-up and voiceover telling us all about this group, and some laboured comedy that goes on for far too long, this group of actually pretty good fighters (well, two of them at least) are threatened by a local gang who seize their bar. So after much mulling around (and more bloody “comedy”) the group decide to fight back.

Simple and straight to the point, ‘FB: Fighting Beat’ is at least 80 minutes of easy going entertainment. It’s nicely shot and doesn’t try to be anything it isn’t. It unfortunately takes far too long to get to all the fighting but when it does, it’s fairly decent and the last 35 minutes or so is just one long chase and collection of fight scenes. They are decently crunchy and brutal and though they tend to look like they were made up on the spot, the fights at least deliver the requisite Muay Thai flavoured action.

Nothing to write home about but unpretentious fight fun if you are in the mood for it.