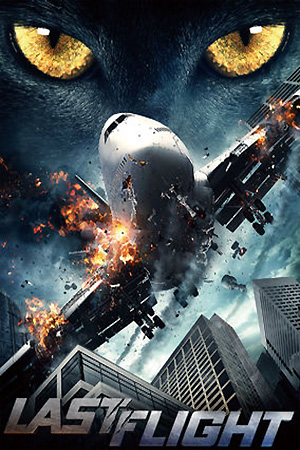 On the last red eye flight from a remote Pacific Island, a rag-tag bunch of passengers’ board a massive jet unaware that something deadly has been smuggled aboard. The few passengers and the plane’s skeleton crew start dropping like flies when something unseen begins to attack them. Having to band together and fight the mysterious creature, the motley crew must also battle a raging typhoon which threatens to bring the plane down, along with the growing distrust amongst their own ranks.

A jumbo jet, an array of annoying passengers to be picked off one-by-one, a raging storm and a mysterious creature stalking the cabin preying on the disposable cast: all great ingredients for a tasty B-movie ride. Not so in the case of ‘Last Flight’. Despite a great set-up for B-movie silliness (ala ‘Snakes on a Plane’), this shonky flick takes itself way too seriously, takes an age to get to the fun monster mayhem, and has enough wobbly acting and CGI naffness to fill several B-movies. This should have been some silly, slick fun but is instead just a slog with far too much exposition and unnecessary melodrama clogging up proceedings. This reviewer is a big B-movie fan and loves all the kookiness and low budget nonsense that comes with them but ‘Last Flight’ was just too shoddy for even my low standards.

Things pick up slightly in the last 15 minutes or so when the creature is let loose and some monster action fun rips its way through the cabin. Sure the critter will likely cause more guffaws than screams but at least it’s finally let loose and director Vincent Zhou embraces the insane daftness of his monster picture. If only the rest of the 80 minutes had been this much fun. The cast is all over the place in terms of acting (though ‘The Man with the Iron Fists’ Zhu Zhu gives it all she’s got), the aforementioned melodrama sucks all the fun out of proceedings, and the sense of silly fun that is needed to make a flick like this work is sorely missing. Despite the energetic finale, ‘Last Flight’ is dead on arrival.