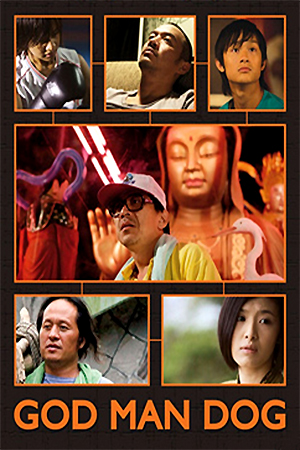 The inter-cutting of several storylines that overlap and have characters from each storyline eventually cross paths is a well used formula to create great drama. Much like ‘Amores Perros’, ’21 Grams’ and the highly overrated ‘Crash’, ‘God Man Dog’ tell the stories of several sets of characters whose lives all eventually cross and collide. A small, wonderful film about everyday people, ‘God Man Dog’ is perhaps the most successful at the interweaving storyline technique and a touching look into a unique, albeit brief, period in the lives of a group of normal people.

A young modern couple attempt to cope with the loss of their baby and the growing alienation between themselves. A lonely truck driver, who is saving for a new prosthetic leg, drives a truck full of Buddha gods around the country to carnivals and forms a friendship with a seemingly homeless kid who makes money winning eating contests. A young athlete attempts to cope with the loss of her brother, her drunken father and the pressure to succeed at her sport to leave her mundane life behind. Said drunken father is also attempting to give up the booze but finding it harder than expected. Ultimately all these characters lives will  cross paths on one eventful day.

Now the above may not sound wholly original and with all the characters problems, hard going. At times, ‘God Man Dog’ is very serious and the loneliness and turmoil some of the characters are going through seems like it will never end. However, Chen Singsing’s film is a gentle and often realistic portrayal of humans dealing with grief and loneliness. The drama is never mawkish, never thrust into our faces and the performances are outstanding. Not least Tarcy Su as the grieving mother. The laid back pace of the movie may mean things take a while to get going but once they do we have come to care about the characters. Despite the seriousness of the subject matter Chen has not forgotten to make us smile with some wry humour peppered throughout especially when the film reaches it’s optimistic, but never preachy or schmaltzy, conclusion.

The pace may irk some and any story that has interweaving storylines is going to employ the element of coincidence at some point. But ‘God Man Dog’ never feels contrived and the acting always carries it through any slow spots. It is also beautifully shot and mention must go to how dogs, God and man are often all included in a scene with subtle effort and surprise. Seek it out as ‘God Man Dog’ is a touching and rewarding piece of cinema from Taiwan.