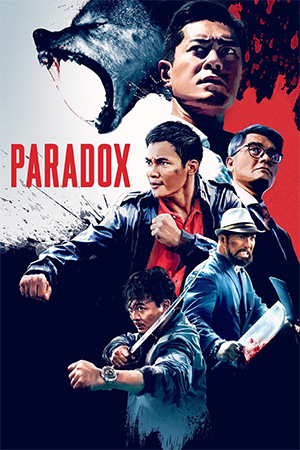 The third instalment in the ‘SPL’ franchise sees original director Wilson Yip return (after Soi Cheang stepped in for Part 2) for another dark crime tale that doesn’t skimp on the nihilism or the hard edged fight action. Part 2’s Louis Koo also returns to the fold as a Hong Kong cop whose estranged daughter goes missing in Thailand. Venturing to said country, he sets out to find her, teaming up with local cops Wu Yue and Tony Jaa to track her down. But as they dig deeper, the trio soon uncover a sinister plot of kidnapping, organ stealing and corrupt government officials.

Firstly, ‘Paradox’ delivers a similar heady mix of bone breaking action, melodrama, intercutting storylines and themes of destiny and redemption to the previous ‘SPL’ films. Secondly, ‘Paradox’ is one dark ride. While it’s certainly exhilarating in parts and glossy to look at, this is not a happy film. Koo and co. go up against some very nasty individuals and the film pulls no punches in showing the dark world the hero cops must navigate. Corruption is rife and morals are scant (even Koo’s main “hero” is not perfect and dare say, not overly likeable to begin with!) as Yip is focused on delivering as much a dark thriller as an adrenaline charged action film. For the most part ‘Paradox’ finds a satisfying balance between the two, though like previous entries the action does tip into OTT territory which occasionally jars with the dark and serious tone. A minor niggle really, as Yip wields an assured hand delivering a sharp and shocking thriller worthy of the franchise.

Louis Koo and Wu Yue are on great form here, tearing through the film in the name of justice. Koo even throws himself into the action holding his own against the likes of Yue, Jaa and Collins. Jaa, who was one of the central protagonists in Part 2, really only has a glorified cameo here but at least gets one decent scrap against the formidable Chris Collins. With fight action being handled by the legendary Sammo Hung, ‘Paradox’ builds to its big action blow outs’, meaning one is invested in character and narrative by the time the sweet fight action erupts. And as is to be expected from team Hung and Yip, the action is glorious albeit brutal. Save for the odd bit of OTT stunt/wirework, the fight action is fast, grounded and fierce. Hung goes for a brutal hand-to-hand combat style and throws in some impressive (and dangerous looking) machete-play come the finale. Yue and Collins excel here, showing they’re both incredible screen fighters and while ‘Paradox’ may not be saturated in action, the set-pieces it does contain are stellar.

With a few tonal wobbles and the fact female characters are unfortunately given short shrift, mean (for this two-bit reviewer at least) this entry doesn’t feel quiet as fresh as the previous two. Still, ‘Paradox’ has a lot going for it not least its impressive action and cast, and with a brave commitment to telling an often dark and disturbing story (don’t expect an overly happy ending) make it a more than worthwhile hard edged action thriller.