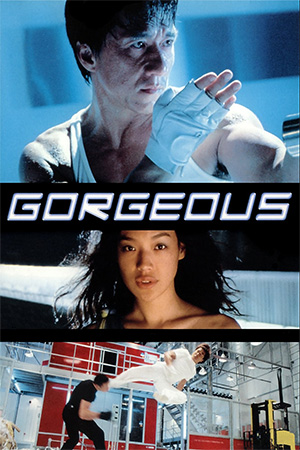 Ah Bu (Shu Qi) is a local girl from a small village in Taiwan who dreams of finding the right man. One day she discovers a message in a bottle that reads “I am waiting for you” and contains a Hong Kong address.  Deciding to take a chance, Bu sets out to meet the mystery man capable of making such a romantic gesture.  Upon arrival she learns that the note was in fact intended for the man’s boyfriend, and all seems lost until she catches sight of Nick (Jackie Chan).  Thanks to his wealthy playboy lifestyle and obvious charms, Bu begins to feel that Nick could truly be the one but does he feel the same way?

Jackie Chan steps out of his predominately action-shaped shadow to appear in ‘Gorgeous’, his first romantic comedy. While this may shock/disappoint some of his fans, the resulting film is actually surprisingly enjoyable. Chan is still considered to be a heartthrob by many, and he certainly has a unique charm that has always been a big part of his appeal. It is for this reason that he just about manages to overcome the age difference between himself and the lovely Shu Qi, and most of their romantic scenes are actually quite touching. It also helps that the film is never too sickly sweet and there’s a strong comedic edge, particularly from a lot of the supporting cast.

This being a Jackie Chan film though, you have to include at least one action scene.  ‘Gorgeous’ actually contains a few minor scuffles as well as two major confrontations between Chan and his stunt team member, Brad Allan. All of the shorter scenes are enjoyable enough, but it is the Allan encounters that impress the most.  Although often played more for laughs, they contain some fast and furious combinations along with some extremely impressive aerial displays, particularly from Allan. However, I must stress that even though they are very well handled, the fights are always more of a footnote to the movie rather than the focal point.

‘Gorgeous’ is certainly a film that is off the beaten track for Chan, and therefore it may not appeal to many of his existing fans. While there are flashes of his trademark fight scenes, it’s the fairy tale love story that always takes precedence. That being said, I like to consider myself amongst his fans and I still enjoyed ‘Gorgeous’ immensely.