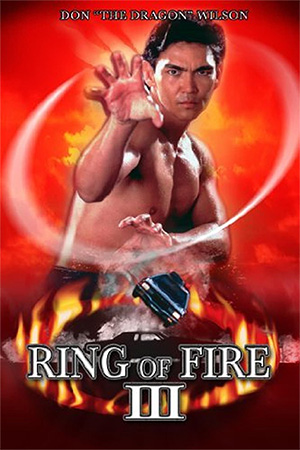 It’s been a few years since he lost his wife, Julie and Dr. Johnny Woo (Don Wilson) is now firmly focused on trying to take care of their son. When he stumbles upon a vehicle collision, Woo can’t help but get involved and he attempts to provide medical assistance to the driver. However, he is quickly set upon by a group of thugs and forced to fend them off until the police arrive to mop things up. Unbeknownst to Woo, his bag was accidentally switched during the incident and he unwittingly heads off for a family trip to the mountains with a computer disk belonging to the mafia.  Now the head of the cartel, Louie (Robert Costanzo) and his Russian counterpart Vladimir Kruskev (Morgan Hunter) are gunning for Woo, but they have no idea what they’re up against.

As the opening credits for ‘Lion Strike’ roll, we see Wilson sparring with a friend atop a skyscraper before all hell breaks loose and he is forced to dispatch of a group of bad guys in a suitably John McClane-esque fashion. From this point on though, these events, which could very well be the finale for any other outing, are strangely never explained or spoken of again. Instead, the film quickly switches over to a fairly predictable B-movie plotline involving a ridiculously misplaced disk and a handful of comically accented villains. Unsurprisingly, this paper thin story combined with some sub-par (and often downright awful) acting often makes the film a struggle, and the lack of anything particularly memorable just makes it feel like another weak straight-to-vhs effort.

Of course, this is still a Don Wilson movie so it’s never more than a few minutes away from a punch-up or two. The opening confrontation with a mafia boss certainly sets the scene nicely, and it’s good to see that the limited budget doesn’t stop them from doing a number of big vehicle explosions. Sadly though, the film never really seems to progress much further and all of the shoot outs and fight scenes feel very formulaic. Wilson makes light work of all of the faceless minions using the same two or three kicks, and even his big battle with the “Russian” henchman, played by Chris Nelson Norris, seems underwhelming to say the least. It’s also somewhat odd to see that Bobbie Phillips is introduced as a bit of a badass, but as soon as things go south she is quickly resigned to being little more than an inconvenience.

Despite containing its fair share of action scenes, ‘Lion Strike’ seems like a step backwards from its predecessor. All of the fun clashes with wacky opponents are noticeably absent, and the film feels like a much more run-of-the-mill low budget actioner.