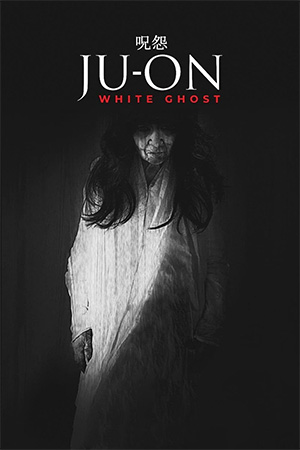 The ‘Ju-On’ (AKA ‘The Grudge’) franchise trundles on, the movie going publics’ or more likely the cash hungry producer’s appetite for freaky ghost kids and long haired demons seemingly unstoppable. After several hit Japanese films and the inevitable American remakes, the ‘Ju-On’ films get a couple of short and sweet spin-offs to coincide with the ten years since the original was unleashed on the horror community.

At an hour each the two instalments don’t wear out their welcome and ‘White Ghost’ is a fine slice of freaky long haired horror. A set of characters cross paths in and around the cursed house from the original ‘Ju-On’ movie. A new family moves in but the “grudge” left behind by previous occupants is very much present and takes its hold on the young son of the head of the family. Work in a Christmas time setting, a freaky old lady ghost often lurking around in the background, an alarming incident involving a knife to the neck, a cursed mirror, a rather nasty beheading and all kinds of interlinking/time spanning haunting and ‘White Ghost’ is an engaging and eerily effective ‘Ju-On’ tale. Well acted, tightly plotted and directed ‘White Ghost’ piles on the scares thick and fast cramming in an awful lot of ‘Ju-On’ ghost weirdness into its short running time.