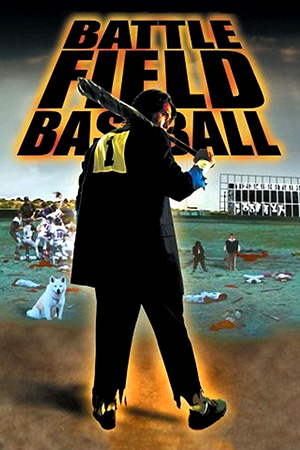 Seido High is a unique school to say the least. It’s a huge underachiever that is filled with eccentric teachers and hardcore bullies, all of whom seem have very little time for promoting the school’s good name.  That is except when it comes to baseball which is a passionate pastime of the principal and the only activity in which the pupils seem to excel.  Preparing his star players, Seiko look set to mount a serious challenge on the championship this year or at least that is until they discover that they will have to face the legendary Gedo High – a team consisting of the living dead who take no “living” prisoners.  All seems to be lost until a new boy appears on the scene who possesses incredible throwing powers that are sure to trouble even the most hardened of baseball veterans. Now if they can only recruit him they could become competitors again but even if they manage that, will his powers be enough to battle the vicious Gedo High or will they all wind up being massacred on the playing field.

From the reviews and previews that filtered through to me for ‘Battlefield Baseball’, the movie was billed as an exciting blend of insane action and tongue-in-cheek horror that had pushed it firmly towards cult status.  However, the reality is in fact nowhere near any of these predictions and the film is more akin to a quirky, and very typically Japanese, comedy that is inspired by comic books more than anything else.  Unfortunately though, it isn’t the lost ark of Japanese spoofs as the shallow plot and pointless character predicaments combined with somewhat fruitless direction mean that in terms of entertainment, the film seems to be over almost as quickly as it began.  Yamaguchi’s bland backdrop of the good vs. evil baseball teams is handled poorly with no real heart or even a solid storyline, it’s just as simple as a bunch of school kids battling it out at baseball with a handful of half decent gags thrown in.  It is however the various action movie and video game parodies that do earn it the majority of points for my final mark because Sakaguchi’s send up of the hero always seems to be right on the money and a couple of the routines do actually land.

Quite what Yamaguchi had planned when he created the action for ‘Battlefield Baseball’ remains a mystery to me as it certainly doesn’t live up to the film’s billing as “cult action entertainment”.  For the majority of its running time the movie promises far more than it delivers, creating a substantial atmosphere before a supposed combat sequence and then cutting away at the vital point only to pan back and show the resulting aftermath.  All this does is leave the viewer in a constant state of expectancy and even the rare times that the over-the-top comedy does cover up the flaws in the action it still lacks any flair for the original.  This could all be forgiven though if the film was aiming for the ‘Evil Dead’ style black comedy with grotesque gore gags but even these efforts fall relatively flat.  The majority of the undead characters look poor thanks to ultra cheap makeup effects and the extremely obvious rubber body parts that fly around only provide unintentional amusement which is a sign of desperation when you resort to laughing at the shoddy effects.

Aside from the odd comedic highlight, ‘Battlefield Baseball’ feels more like a swing and a miss than a home run.  Considering how many people seem to sing its praises, its strange to see just how little it has to offer and I’d really have to mark this down as one to avoid.