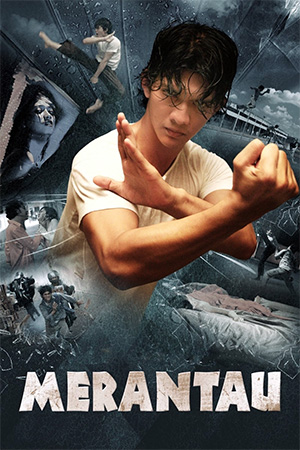 Yuda is a skilled practitioner of Silat Harimau who lives with his family in a farming village in West Sumatera. Although he enjoys the quiet lifestyle, he has now reached that age where he must begin his “Merantau”, a century’s old rites-of-passage where a young man must leave the comfort of their family home to forge their own destiny. For Yuda, this means making the trip to the big city where he soon finds himself struggling to find work or a place to stay. However, a chance encounter results in him defending the orphaned Astri from becoming the latest victim of a European human trafficking ring led by the wildly psychotic, Ratger and his right-hand man Lars. With Ratger injured in the mêlée and seeking both his “merchandise” and bloody retribution, Yuda’s introduction to this bustling city is a baptism of fire as he is forced to go on the run with Astri and her younger brother Adit as all the pimps and gangsters chase their every step.

Bearing more than a passing resemblance to ‘Ong Bak’, ‘Merantau’ is essentially the age-old story of an innocent country bumpkin facing up to the harsh realities of the big city. While the film is undoubtedly well shot with some serviceable leading performances, its main problem is that we just don’t know or care enough about any of the people involved to give a damn. Sure, it’s a bummer that the hero has to leave his family and it’s never nice to see the leading lady get beaten around like a ragdoll, but this is a set up that we’ve seen a million times before and there just isn’t anything about these particular characters that screams “care about me”. This isn’t helped by the fact that the bad guys are just far too bland to make you hate them, meaning the whole situation feels somewhat redundant from the off and there isn’t a single moment where you find yourself rooting for the hero to give them a healthy helping of boot pie.

Of course, most people picking up ‘Merantau’ won’t be looking at the story and when it comes to the all-important action scenes it is… well, kind of average actually. Admittedly it does all start out quite well with Silat seeming like an interesting choice of martial art, but it isn’t long before you realise that the choreography just seems to lack the variety and originality that pushes these films into the extreme. By the time you reach the second or third fight, you start to notice that it is pretty much the same combinations of punches and kicks every time and the choreography isn’t anywhere near intricate enough to keep you “oohing” and “ahhing”. Surprisingly, there are also a few moves that even border on sloppy (not exactly amateur, but just not as well executed as they should be) and all of the bigger stunts seem to be a little too staged to rival the likes of ‘Ong Bak’ for excitement.

‘Merantau’ is a good-looking film, but in every other department it is just a touch too average to stand out from the crowd. Unfortunately this means that in terms of action and excitement, it doesn’t quite do enough to make the grade.