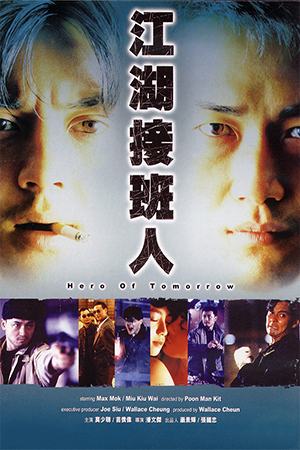 In the wake of the success that followed ‘A Better Tomorrow’, a thousand imitation Triad dramas were launched upon the Jade screen hoping to capitalise on a profitable formula.  Most of them failed due to tired storylines, poor effects or just plain bad acting, but ‘Hero Of Tomorrow’ somehow manages to carve a little niche of it’s own in the Heroic Bloodshed genre.

Crow (Mok Siu Chung) is a street vendor who sets up his stall outside a building belonging to one of the biggest Triad bosses in Taiwan.  Over the years he has become friends with one of the apprentices for the gang known as Little Santung, who he hopes will eventually introduce him to the main man.  When a chance to gain recognition arises in the form a street brawl gone wrong, Crow seizes it with both hands and lunges in fists first.  All goes according to plan and he soon finds himself as a runner for the Triads with his sights set firmly on a swift rise to the top.  Sadly, when the boss takes a shine to his girlfriend he is forced to defend her and goes from shining star to wanted man.  As good as he is, will Crow be able to take on the entire gang single handedly?

Perhaps the reason that ‘Hero Of Tomorrow’ stands out from a sea of similar movies is that it contains the ability to shock and disturb as well as make interesting moral dilemmas for its main heroes.  Once you have seen one shoot-out you could easily argue that you have seen them all, but when the characters are actually forced to use their brains then the stakes become slightly higher.  What if your best friend decided to double cross your boss or maybe your girlfriend has become the object of affection for the local Triad Big Brother?  It’s choices like these that place the viewer inside the mind of a young man who is still striving to prove his greatness amongst the underworld population and making life as difficult for himself as is humanly possible.  ‘A Better Tomorrow’ ignited the same spark which is why it became such a huge success and ‘Hero Of Tomorrow’ borrows elements from its inspiration whilst also proving that it can, in parts, be equally intense.

Oddly enough for a film in this category, ‘Hero Of Tomorrow’ actually contains very few action set pieces.  There are guns present throughout the film but they rarely become involved in mass slaughters until the finale, and even this is fairly short and somewhat tame in comparison to the normally required quota of bloodshed.  It does however satisfy those of you with a hankering for as many bullets as possible but each shot seems to only be fired to achieve a purpose and guns are not flashed around wildly just for the sake of it.

‘Hero Of Tomorrow’ starts out slow, almost as if it is trying to decide which character to focus on. Once you get past this though, it turns out to be an above average thriller which leaves the audience with more than just another high body count.