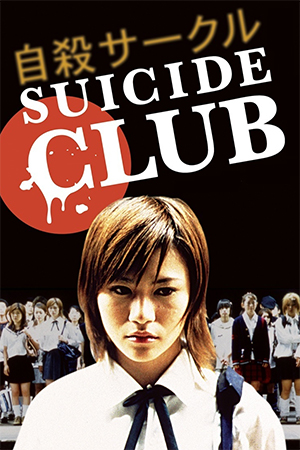 Those who find alternative cinema intriguing, especially Japanese alternative cinema, may enjoy the rather baffling and sometimes outright mind boggling, ‘Suicide Club’. Director Sion Sono (‘Exte: Hair Extensions’), weaves an almost hallucinatory tale of an epidemic of rash suicides across Tokyo. Young people are throwing themselves in front of trains, off buildings and out of windows, all for a trend that seems to make death cool. Detective Kuroda (Ryo Ishibashi) and his squad are called in to investigate, finding that a mysterious website and a rather odd teen pop group may have something to with all the suicides.

To say ‘Suicide Club’ is a trip, is an understatement. It’s been a while since I’ve watched a film that has equally repulsed and mesmerized me. To tell you exactly what happened in the film and what it was about is something I’m not sure I could do. Yet, this is part of the film’s beauty, as right from the start the narrative takes you on a journey that even Alice in Wonderland may consider strange. The infamous opening scene features 50 Japanese high school girls lining up on a train platform, holding hands and then throwing themselves in front of an oncoming train, blood spewing everywhere. Things don’t let up from there, with a mysterious white sports bag turning up at the murder scenes, coils of the victims skins held within; a rather bizarre teen pop group; an even more bizarre cult/gang; and all manner of weirdness and grossness that populates this very unique film. Despite the impressively strange set pieces, the film does touch on isolation and how it is affecting Japanese society. It never delves too deep but uses a real subject to tell a weird and frightening tale that gets stranger and stranger as the film goes on. Yet, the film will most likely be remembered for its ghoulish appeal, and that’s no necessarily a bad thing.

Not easy to understand (and I’m not sure that’s even the point, as it seems to be more about the surreal experience than any actual coherency) but definitely unique, challenging and better to see knowing as little about it as possible. ‘Suicide Club’ may not be for those who like their cinema more conventional but for those who like the subversive, then ‘Suicide Club’ is heartily recommended.