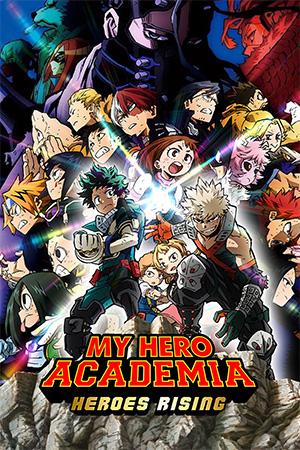 Class 1-A are sent to Nabu Island to help the locals as part of a safety program. Although the group will be working unsupervised, the island is so quiet that it often feels more like a vacation, much to the chagrin of certain class members. Meanwhile, a new villain is on the prowl and he’s been stealing the quirks of random individuals, leaving the heroes baffled as to his true intentions. When said villain and his comrades suddenly appear on Nabu, they set about causing mass panic and destruction. With help several hours away, Deku and his friends are now the island’s only hope.

The first ‘My Hero Academia’ cinematic outing (‘Two Heroes’) was entertaining enough, but it rarely felt like anything more than extended filler. While ‘Heroes Rising’ arguably makes for an overall improvement, the plot is hardly what you would call a radical upgrade. As with the previous outing (and numerous other anime movies that have come before), the film conveniently relocates our heroes to a remote location far away from anything connected to the main story. Unsurprisingly, it is here that they meet two small children, one of whom has a sassy predisposition towards heroes, and encounter a handful of new villains, leading to a very predictable tale that is really just about good guys beating up bad guys.

This isn’t to say that ‘Heroes Rising’ is all bad though, as it does still contain a number of enjoyable aspects. Once the main setup is out of the way, the film puts the focus firmly onto the relationship between Deku and Bakugo. Fans of the show will already be well aware of the issues between the pair, but the ways in which they step up to deal with their heroic duties and leave a mark on the children is all quite uplifting. Admittedly this does come at the expense of screentime/depth for the other characters, but it is an important bond that is clearly going to be pivotal for the future. It’s also worth highlighting the quality of the animation on display. The techniques and style are definitely a notch up from the show (especially recent episodes) and there are some moments, particularly in the finale, that are a real treat for the eyes.

Where ‘Heroes Rising’ makes the most substantial leap however, is in the action sequences. Putting aside the fact that the quirks of the villains themselves are somewhat, shall we say overly familiar, the strength and powers they possess make for some interesting confrontations. Both the main antagonist and one of his sidekicks in particular, are very strong opponents who really start to stretch the class in combat. And even though some members of 1-A are slightly short-changed in terms of their power usage, particularly Todoroki, it’s still nice to see them all working together during one of the closing segments. As for the final fight, this is perhaps where the boundaries are stretched a little too far. Even though the animation is undoubtedly astounding, the actual method that is used to defeat the main villain as well as the way in which it is quickly reversed all feels far too convenient.

‘Heroes Rising’ is a step in the right direction but it is still some way from being the ultimate ‘My Hero Academia’ movie. The plot is just another lazily thrown together anime filler affair and everyone outside of the two main protagonists feels somewhat superfluous. Still, if you’re a hardcore fan of the show or you just appreciate some nicely animated fight scenes, then it’s likely you’ll still find enough here to warrant your time.