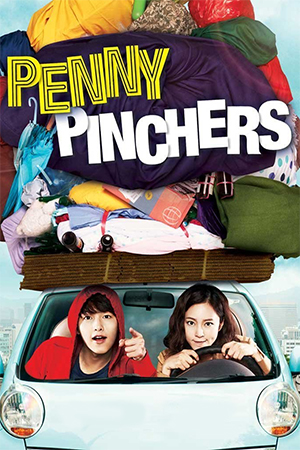 Frugal Hong-Sil uses every opportunity to squeeze a few Won from recycling glass bottles, taking complimentary sugar from coffee shops and carefully rationing her own meals. Living above her is Ji-Woong, a carefree – some might say ditzy – unemployed office worker who relies on handouts from his mother to get by. When Hong-Sil uses Ji-Woong’s wide-eyed naivety to dupe him out of a government relocation grant, her conscience twinges and she resolves to help him save the money he needs to stay in his flat. Hong-Sil teaches her new friend all of the tricks of the parsimonious penny-pincher while he uncovers the childhood trauma that has led to her obsession – inevitably they begin to fall in love.

‘Penny Pinchers’ is intended as the rom-com needed for these times of worldwide austerity. While Korean cinema is usually unapologetically glossy, Kim Jung-Hwan could potentially have shown life away from the air-brushed fashionistas of Seoul. Unfortunately ‘Penny Pinchers’ is every bit as asinine as the very weakest of the genre, proving that a competent idea can easily be bludgeoned into insipid mediocrity.

For a romantic comedy to have a pair of protagonists who prove so completely dislikeable means the film shoots hits itself in the foot with the very first bullet. Pretty Han Ye-Seul is turned into a shrewish, money-obsessed leading lady who spends most of the film committing fraud in one way or another, while her love interest comes across as a bit of a cretin. The surrounding characters add little or no charm to the film meaning this is another arduous two hours in the company of an admittedly photogenic cast.

There’s also something vaguely offensive about a film where characters whine about their lot in life while treading on those around them. It shouldn’t be impossible to create two sympathetic people even taking into account the relative opulence of the society that surrounds them, but ‘Penny Pinchers’ is impossible to care about. Taking note of the theme of parsimony, I would heartily recommend that you save your money and time to invest elsewhere.