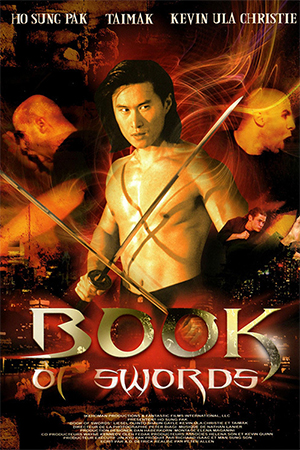 When a police bust goes wrong, Lang’s partner and brother wind up dead. Unable to face up to reality, Lang decides to run away from it all and leaves the city. Three years later, he can no longer live with the guilt and returns to Chicago to see if he can track down the assassins. During his quest, he discovers the existence of the “Book Of Swords”, an ancient manuscript that reveals a terrible secret. As the evil sprit of the warrior Kwai Shin returns from the Netherworld to annihilate humanity, only the chosen one, possessed with the spirit of the dragon can prevent certain apocalypse.

‘Book Of Swords’ is a movie that has garnered quite a cult reputation over the years, mainly due to its connections with the Mortal Kombat video game franchise. Not only does it feature four members from the original cast of the game, but it also ‘borrows’ several elements from the game’s storyline. Now while it is nice to see the faces of Liu Kang, Kano, Johnny Cage and Mileena back in action, there is no denying that this is a pretty weak attempt at producing a legitimate feature film. Sporting that familiar TV movie haze, ‘Book Of Swords’ looks and feels cheap throughout. The story, despite including a couple of Mortal Kombat style mystical references, is relatively dull and makes regular use of awful soap opera style clichés. The acting is also on a par, with most of the performers reciting their lines like they are reading off cue cards, while the director only makes matters worse by forcing them to ham it up in what feels like endless amounts of slow motion.

Thankfully, the film does include a number of action scenes but even these rarely live up to expectations. While there is no doubt that the likes of Pak Ho-Sung and Pak Hoyoung are talented martial artists, the majority of the action is spoilt through a combination of uninspiring choreography and awful editing. For anyone who is familiar with the dark side of American made martial arts movies, you will know exactly what to expect as the camera constantly seems to dance around the actors and often manages to completely obscure the moves by shooting close-up or just focusing on an opponent’s back. Unfortunately, this isn’t helped by the fact that the majority of the choreography just isn’t that exciting. Yes, Ho-Sung is very capable of pulling off some nice kicks, but you really need to string them together in some sort of fluid combination to really captivate the audience. In fact, the only time I really felt drawn in was during the final fight, but even this seems to fade out with a huge slab of cheese rather than ending with a bang.

‘Book Of Swords’ offers very little of substance and is really only suited to hardcore Mortal Kombat fanboys. For anyone else, particularly those of you who have experienced a few of the finer examples of martial arts cinema, this is really not worth the effort.