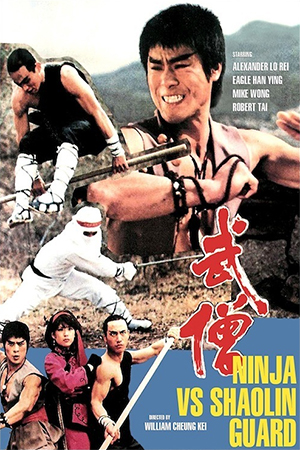 When the new President of the Chinese Republic demands that the Shaolin temple hand over the Golden Sutra of Da Mor, the Abbot outright refuses. A fight ensues and the Abbot and the artifact only narrowly escape thanks to the help of four mischievous monks. Unfortunately his wounds are too serious so the Abbot uses his dying breath to ask his saviours to transport the Sutra to safety in the hills of Tibet. Thus begins a long and arduous journey which sees the monks forced to deal with everything from harsh weather conditions to deadly assassins. With so many obstacles though, will our heroes be able to make it to their intended destination and what will be waiting for them when they arrive?

Although the title may contain the word “Ninja”, this film really has absolutely nothing to do with the infamous masked assassins. Instead, this is more of a typically old school kung fu flick that proves to be one of the more satisfying low budget affairs to emerge from Taiwan. Admittedly the plot is one we’ve seen several times before and the characters here certainly seem to display some questionable morals. Still, all of this is easily overlooked when a film is so obviously geared towards showcasing as much action as possible. Thankfully, the majority of the fights on offer are extremely well handled, and we are treated to some very nifty and intricate choreography performed by talented martial artists. My only minor complaint is that the most talented performer, Lo Rei rarely seems to be given the screen time that he deserves.

Although the plot may be somewhat lacking, ‘Ninja Vs. Shaolin Guards’ remains a very entertaining outing thanks to a wealth of well crafted kung fu fights. If you’re a fan of Lo Rei or chop sockies from the 1970s/80s, then this is well worth seeking out.