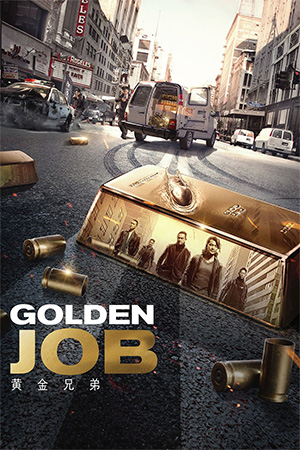 Five childhood friends who have formed a close bond since their days in an orphanage, a taken under the wing of a reformed gangster who teaches them how to fend for themselves. As the years pass, the team continue with their semi-legal work with leader Lion (Cheng) organising numerous operations to help buy medication for a charity in Africa. One last heist is arranged to intercept a convoy of expensive drugs that Lion would prefer to see in the hands of his favoured charity rather than profit-hungry corporations – the intricately staged plan works but an unexpected double-cross leaves Lion in prison and the various other members of the team scattered around Asia. Yet when Lion has served his time, the first thing on his mind is revenge and he sets about to reforming the gang one final time.

The cast of everyone’s favourite Triad recruitment film series, ‘Young and Dangerous’, has been transported from their 90s heyday into the 21st Century. Ekin Cheng still has floppy hair, some have aged slightly less impressively and one has even adopted that most depressing sign of middle-age angst, the top knot. ‘Golden Job’, however, turns the moody anti-heroes of yesteryear into slightly less fresh looking Robin Hood figures – and for most of the film, it works. The actors have matured with a degree of self-deprecation regarding the past and fit very well into the new roles, coming across as a much more likeable quintet of protagonists than Chan Ho Nam et al. While the chemistry is strong it is never allowed to morph into self-indulgent ‘Oceans’ Twelve’ style backslapping and Hollywood self-aggrandising.

Working with what is probably a minimal budget by Hollywood standards, Chin Ka-Lok fashions quite an impressive action film, complete with international locations and slick looking set-pieces. Somehow, Chin – who is of course greatly experienced with putting together action sequences for prestigious Hong Kong films like ‘Line Walker’, ‘Cold War’ and ‘Vital Factor’ – has squeezed every last $HK out of the production and put it on the screen. Coming across like a mix of ‘Once A Thief’, ‘Ocean’s Eleven’ and the ‘Fast And Furious’ series, ‘Golden Job’ is at least as entertaining as most of these and often beats them at their own game. While the ‘Fast And Furious’ movies have long since descended into unintentional self-parody and destruction porn, ‘Golden Job’ is, for large portions, exciting and engaging.

Where ‘Golden Job’ begins to struggle is in the later stages where in the inventive set-pieces are dropped in favour of repetitive gunplay. Hong Kong cinema was where the standard gun-fight was raised into an art form and though there are flashes of that 80s zip early on, the finale is a rushed rehash of ‘Commando’ and slightly undermines the rest of the film. It should also be noted that, while most of the computer effects used are surprisingly effective, there are a few scenes that look questionable to say the least.

There is a measure of nostalgia in enjoying ‘Golden Job’ though it is much more than just a back-to-the-80s/90s recall with stars that you don’t tend to see in bigger budget flicks today. That said, this reviewer really enjoyed seeing Ekin and Jordan as thick-as-thieves again (pardon the pun) while the appearance of not only Yasuaki Kurata but also the legend that is Billy Chow helped through anything approaching a miss-step in ‘Golden Job’. A pleasant surprise that is much better than a rather uninspiring title would imply.