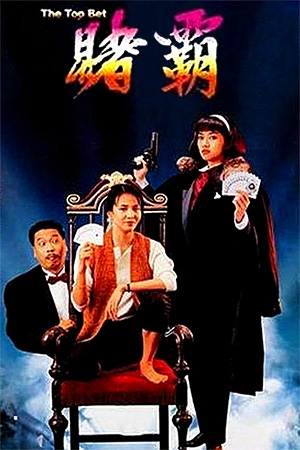 In 80s Hong Kong cinema, just following the lineage of some film series is difficult to do. There’s official sequels, unofficial sequels, in-name-only sequels, meta-sequels; getting through the difference between these is one of the first challenges many new Hong Kong cinema fans face. ‘The Top Bet’ is a good example of the confusion; it’s sometimes referred to as ‘Queen of Gamblers’ even though a film of that name with the same star as a different character appeared a year later, it’s a sequel to ‘All For The Winner’ which in itself is a kind of meta-sequel to ‘God Of Gamblers’ which had an unofficial sequel that was a proper sequel to ‘All For The Winner’. Let that sink in for a moment.

‘Saint of Gamblers’ (Stephen Chow who has a small cameo here at the end) has just beaten nefarious crime lord and obsessive gambler Hung Kowng (Chun Pui). Before he can defend his title though, the Saint decides to go on a world tour, leaving his manager Uncle San (Ng Man Tat) with a major problem when gangster Chan Chung stakes him the funds to completely destroy Hung Kwong at the World Gambling Championship. Chan is not a patient man and threatens to kill San unless he can find a solution; thankfully, at the same time, Saint of Gamblers’ sister Mei (Mui) has been sent to Hong Kong to stop her brother using his powers for financial gain. Mei is also blessed with uncanny powers, but refuses to help San and so he is forced to turn to Taiwanese card sharp Fanny (Cheng) who uses elaborate tricks to feign gambling skill. But Hung Kwong has also been developing his abilities with the help of powerful Mainland mentor Yim Chun.

‘The Top Bet’ is that very parochial fusion of gambling and ‘nonsense comedy’ (mo lei tau) that many of us are still baffled by after all of these years. An undisciplined sequel to ‘All For The Winner’, this is one of those films that switches from action, to drama, to gambling scenes and back to the broadest comedy imaginable without the hint of an apology to its audience. You have the sight of Ng Man Tat – as he did in ‘All For The Winner’ – becoming a febrile, twitching wreck when a relative calls him Uncle San, people throwing playing cards like shuriken (a Hong Kong film staple it has to be said), ‘Card Rubbing Skills’, kung-fu, gunplay and quite a bit in between. This isn’t a movie for everybody.

Yet, as Hong Kong cinema continues to struggle, there is something greatly reassuring about watching a film from a time when the industry was invested with real hubris. That’s not to say it’s a classic – it may just about be bearable in fact – but if you let it wash over you it can provide oddly diverting entertainment. The ace up the sleeve (pardon the pun) is the pairing of Cheng and Mui, two excellent actresses who bounce off each other superbly. Cheng in particular is something of a favourite of this reviewer and seeing her at the height of her powers is a joy to behold. She, along with the much missed Mui, is the glue that bonds together the utter absurdity on offer and makes ‘The Top Bet’ much better than it deserves to be.