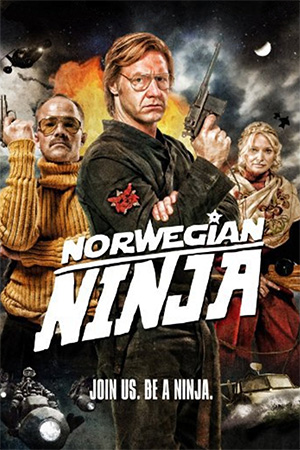 Ninja’s. Norwegians. Thomas Cappelen Malling’s retro cool movie has both in this deadpan send up of martial arts films, spy movies and, what seems to be, instructional videos. In fact, the film is often so authentic in its late 70s/early 80s styling that it often resembles orientation videos from that time period with one of the funniest scenes in this short and swift film being a mock orientation video showing our hero, Arne Treholt (Ousdal) waxing lyrical about why you should become a ninja, how awesome it is to be a ninja and how their super secret training ground is protected by feng shui! Yes, feng shui: which hilariously acts as an invisible force field which knocks intruders unconscious.

Feng shui protected bases are one of the many absurd things to feature in ‘Norwegian Ninja’. This is a movie so deadpan and in love with its own style and unique way of telling a story it may split viewers down the middle: you’ll either get on board with its bonkers approach or be turned off by it’s incessant need to make everything retro and off kilter. Either way there is no denying ‘Norwegian Ninja’ is a novel take on the black clad warriors who clogged up hundreds of low rent films in the 80s and you’ve really got to be devoid of any sense of humour not to get a giggle out of Treholt appearing in every room/situation by ninja smoke bomb and disappearing the same way and nobody batting an eyelid: awesome!

While some of the humour may be of a particular taste and the tone a little too self aware for its own good sometimes, Thomas Cappelen Malling still fills his flick with stylish sequences and lots of little pokes at the ninja genre. There is a great underwater sequence featuring James Bond style mini submersibles (and much hilarity with our ninjas being able to write underwater (!) and mistaking a shoal of fish for enemy submarines), some impressive scenes featuring two ninja dudes base jumping down the side of some very dangerous looking cliffs in groovy looking ninja wing suits and lots of (hopefully intentionally) hilarious ninja fights.

Maybe not to everyone’s taste but ‘Norwegian Ninja’ is still a fine, and often funny, send up of eastern kung fu, ninja movies and all those TV shows and films from the 70s/80s where everyone wore polo necks and giant glasses, as well a distinctive slice of Scandinavian humour.