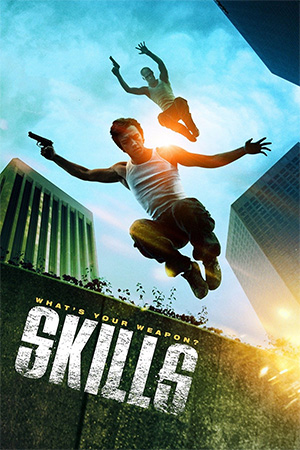 Kelvin (Gustafsson) is your regular parkour loving teen that just wants to jump around, wear cool clothes and lust after his best friend’s girl (Magnusson). His over protective police officer father is worried about him, especially when he thinks Kelvin’s love of parkour and fighting may lead him to a new underground tournament called Skillz. But when Kelvin’s dad is shot, possibly by goons with ties to Skillz, he decides to stop being a moody teenager, and with the help of his group of parkour/skateboarding/kung fu/dance loving buddies, find out who shot his father.

‘Skills’ has all the ingredients for a fast and fun action film: parkour, martial arts, underground fight tournament and Tim Man (‘Ong Bak 2’, ‘Bangkok Adrenaline’, ‘Ninja 2’) on hand to handle all the fight action. Unfortunately, and despite its best intentions, ‘Skills’ isn’t as exciting as it could be and is undermined by a load of unwanted teen angst. For a film featuring the fast and furious sport of parkour there is way too much moping around by the young leads whom and, to the detriment of the film, are just too damn po-faced about everything. Well, all except one of them who combines dance with kung fu and seems to be some sort of comic relief with all his constant mugging.

Fortunately, there is a fair amount of parkour and martial arts action on hand to liven things up. It’s all very sprightly and inventive with Tim Man mixing the parkour chase element with the kung fu fight component well. He also gets to cut loose in several fight sequences, his scenes arguably being the highlights of the film. Unfortunately the big finale, when the Skillz tournament finally kicks in, is a bit of a let down. It feels rushed and a little messy and doesn’t generate the tension and excitement proceedings should have been building to.

Overall, ‘Skills’ is a decent effort from a group of filmmakers obviously wanting to make their own parkour themed action film but is ultimately only sporadically entertaining (usually when Tim Man is on screen kicking butt!) and not as thrilling as it should have been.