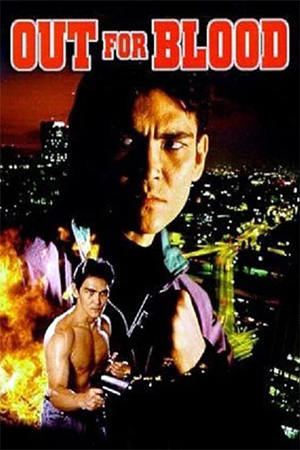 While out for a walk one night with his family, lawyer John Decker (Wilson) is viciously attacked by a group of unknown assailants. His wife and son are both shot and killed in cold blood, but for some reason Decker is only subjected to a severe beating. Although he survives, his memory is in pieces and he finds himself unable to recall the people responsible for the attack. Driven by a desire for justice, Decker begins to walk the streets at night under the guise of “The Karate Man” and God help any criminal who chooses to get in his way!

‘Out For Blood’ sees Don Wilson portraying yet another highly regarded professional who is forced to unleash his hidden martial arts skills. In a slight departure from the usual formula though, Wilson takes on the role of instigator as his character is the one who goes looking for violence. The fairly simple tale of one man taking the law into his own hands is certainly nothing new, but it still makes for a relatively entertaining if slightly silly premise. Unfortunately though, the film does somewhat shoot itself in the foot by making the hero very difficult to empathise with. Although the initial events are obviously jarring, Wilson’s character seems to get increasingly more dislikeable as the film progresses. He continues to butcher his way through every potential villain with no regard for their role in the endeavour, and is generally fairly rude/obnoxious to anyone he encounters. Of course the usual love interest (Shari Shattuck attempting a horrible British accent) and an extremely obvious plot twist are also present, but neither really do much to liven up the overall proceedings.

All that being said, anyone picking up a film called ‘Out For Blood’ is probably only in it for the action. Thankfully, the concept of a vigilante in search of street justice does allow for a fair bit. This being a Don Wilson movie though, most of the fights come in his usual simplistic packaging with plenty of slow motion side kicks and roundhouses on display. While this means that the combat is a bit tame, Wilson fans will probably still be suitably satisfied and there’s the added bonus of seeing him dispatch of the bad guys in a number of brutal ways.

‘Out For Blood’ was clearly inspired by other (better) vigilante movies but it never really comes close to accomplishing anything that stands out from the crowd. The fact that we just don’t care about Wilson’s character is the film’s real undoing and the remainder of the plot is fairly forgettable. However, if you’re fan of Wilson or the PM Entertainment style of filmmaking, you’ll probably still find just about enough action to keep you entertained.