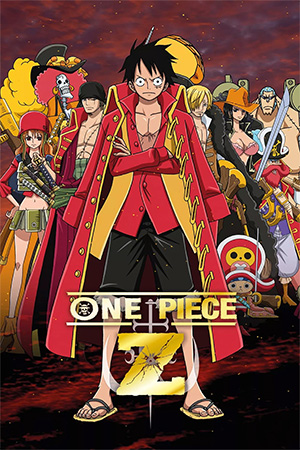 ‘One Piece Film: Z’ is the second ‘One Piece’ movie to be overseen by series creator Eiichiro Oda, and the first to place take post-time skip in the New World. If you’re a long-time fan then no doubt both of these elements will have you quivering with anticipation, but does the movie actually deliver the goods?

Unbeknownst to many, the Marines have been keeping a trump card up their sleeve in the form of a mighty set of weapons known as the “Dyna Stones”. When these deadly spheres are suddenly stolen by the terrifyingly powerful former Marine Admiral “Z”, the Marine HQ moves quickly to deal with the conspiracy that threatens to shake the very pillars of the New World. Meanwhile, when the Straw Hat pirates clash with Z and are beaten quite emphatically, Luffy orders the gang to join the hunt for this new foe so that he can prove to everyone that he is strong enough to become the Pirate King.

Although I enjoyed ‘One Piece: Strong World’, I felt like it lacked any truly Oda-esque moments that set it apart from any typical anime filler movie. Thankfully, ‘One Piece Film: Z’ goes some way to setting things right by bringing a handful of new and exciting ingredients to the table. The most obvious of these is the introduction of a memorable villain, who not only threatens the Straw Hats but also the very world around them. This is accomplished by using an interesting connection with the Navy, allowing for cameos from familiar faces and some intriguing backstory that actually connects quite nicely with the series. Admittedly there is still a basic underlying premise of “good guys vs bad guys”, but it is played out in such a way that it actually feels less like a side quest and more like the outcome actually matters. Of course, there are still plenty of enjoyable comedic interludes with the crew (complete with extremely camp new outfits) and a couple of heartfelt moments that will hit home with hard-core fans. In fact, the only part that I would say bugged me is that Luffy seems to put his personal vendetta above everything else. While I understand that he is adamant about becoming the Pirate King, it did feel slightly out of character for him to completely ignore the safety of those around him.

If it’s action you’re after, then there is definitely plenty of it on offer here. The film opens with a battle that feels like something out of ‘Saving Private Ryan’ and it gives us an instantaneous glimpse of all of the main opponents in action. This pretty much sets the standard for the movie and we get a number of confrontations between the Straw Hats and the main villains that all leave a suitably lasting impression. Unsurprisingly they aren’t quite as epic as the fights from the series, but they are extremely pretty to look at and make good use of the superior budget to inject some exciting camera angles and bolder effects. It’s also really interesting to see Luffy take on an enemy who is well aware of his weaknesses and he definitely exploits them to the fullest. It’s almost like watching Superman facing off against an opponent using kryptonite, forcing him to adapt his strategy to win. It’s just a shame that the final fight doesn’t quite go the distance and it makes Luffy look somewhat weaker than we know he really is.

As we have come to expect from recent ‘One Piece’ movies, the animation here is a noticeable step up thanks to the obvious increase in budget and film stock. This time around they have chosen to go with more of a comic book style that is very reminiscent of the sequence in the show where Luffy punches a Celestial Dragon. Much like that scene, it is pretty effective in parts and some of the character close-ups during battles are nothing short of superb. Unfortunately there are also quite a few inconsistencies that creep in, such as Luffy’s constantly changing hat size, which seems a little lazy considering the production’s scope. Similarly, the fairly obvious computer animation is often quite intrusive as the camera swirls around characters/ships and gives everything a fairly obvious shiny glare.

In case you just decided to skip ahead for the final verdict, I’ll sum it all up by saying that ‘One Piece Film: Z’ is a really good ‘One Piece’ movie. It has some very solid animation, plenty of action and an engaging story that genuinely feels connected to the show. That being said though, there are still a few minor niggles that prevent me from giving it that perfect score.