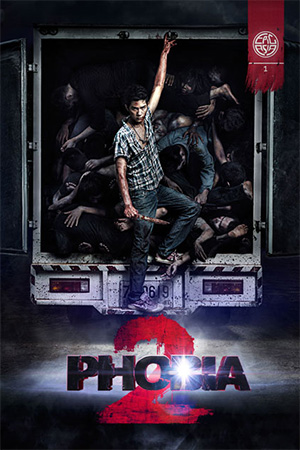 The original ‘Phobia’ (or ‘4bia’) was a neat little anthology of four short but sweet Thai tales of terror. ‘Phobia 2’ sees many of the previous entry’s directors, writers and producers return to now tell five new short tales of terror and is, surprisingly, a superior slice of portmanteau horror.

Tale 1, ‘Novice’: much like the original ‘Phobia’, the first tale is arguably the strongest. Helmed by Paween Purikitpanya (who helmed the second segment, ‘Tit for Tat’ in ‘Phobia’) it sees a young juvenile exiled in the Thai jungle for killing a motorist. Instead of contemplating his actions and repenting his sins he instead angers, through his own misbehaviour, one of the surrounding tree spirits. Now seemingly hunted by said sprit the young lad undergoes a rather alarmingly transformation in a tale that shocks and surprises throughout its short runtime. Buoyed by Jirayu La-ongmanee’s convincingly distressed performance and subtly scary glimpses of the “thing” that is haunting him, Novice is a scary slice of short shock horror.

Tale 2, ‘Ward’: this segment deals with another young man caught in a nastily spooky situation. Arthit is laid up in hospital with damaged legs after a automobile accident and instead of the private room he was promised, is forced to share a room with a comatose hospital resident. Separated by a curtain, Arthit’s curiosity gets the better of him as he attempts to get an ogle at his appears-to-be-dead roommate only for said roomie to suddenly appear “alive” and very much intent on attacking Arthit. What begins as a more fun segment becomes a little predictable in the standard is-the-supposedly-dead-person-really-dead-or-not scenario only for the tale to redeem itself with a nasty and downbeat sting when Arthit’s roommate reveals his true intentions.

Tale 3, ‘Backpackers’: this tale goes all zombie as two Japanese backpackers hitch a ride with some Thai truckers who’s seemingly dead human cargo all of a sudden spring back to life and begin attacking and eating them. The drug smuggling carcasses are now on a bloodthirsty rampage chasing our protagonists across country in a tale that is fun while it lasts but, save for the toxic drugs that turn people into zombies hook, is fairly standard run-amok-zombies-trying-to-eat-people silliness.

Tale 4, ‘Salvage’: steps proceedings up a notch again with a great shock tale of a haunted used car lot. This may not sound particularly frightful but in the hands of ‘Shutter’ and ‘Alone’ director Parkoom Wongpoom and lead actress Nicole Theriault this story of a used car saleslady selling on dodgy repaired vehicles that have been in accidents only to be haunted by the ghosts of said vehicles, is tension filled and again features a nasty sting in its tale like all good short horror fiction should.

Tale 5, ‘In the End’: after four shocking, gory and tense filled segments, ‘Phobia 2’ ends with something a little more light-hearted and silly, and therefore on somewhat of a disappointing note. Featuring and made by the many of the cast and crew of Shutter and Alone, this tale lampoons those films as a film crew is in the middle of shooting a sequel to Alone. The actress playing the ghost girl of ‘Alone 2’ in fact dies on set and thus actually comes back to haunt the rest of the cast and crew. It’s a fun little meta anecdote with the makers obviously relishing the chance to send up their films and genre. Its well acted too and some light relief after the four previous serious segments but suffers in comparison to those proceeding tension filled tales.

As with any anthology, some segments are stronger than others and one’s enjoyment of each will depend on one’s tastes but overall ‘Phobia 2’ is a bigger and better follow up, an ambitious horror film (touching on everything from disturbing the dead, to reincarnation, to karma) and a fine example of Thai produced terror.