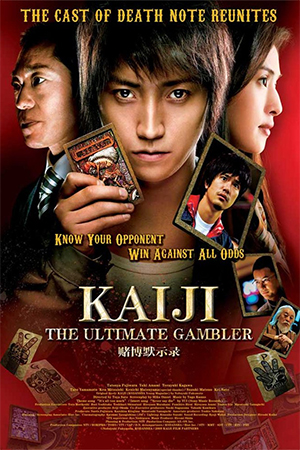 Kaiji (Tatsuya Fujiwara) is down on his luck. No money, no prospects and no respect, he’s fast approaching 30 with nothing to show for it (hmmm, this sounds familiar!). To make matters worse his roommate has run off and left him in considerable debt with some shifty loan sharks looking to collect. However, instead of making him pay up straight away, the loan sharks offer Kaiji a second chance to clear his debt: by taking part in an extreme gambling competition organized by an underground society of rich fat cats who enjoy seeing the lower classes risking their lives for the promise of fortune.  If Kaiji loses? The society own him for life. Supposing he even makes it through the three life gambling tournaments.

’Kaiji: The Ultimate Gambler’, based on a popular Manga and TV series, is about the battle between the classes: the lower and the upper, the rich vs. the poor. No, the film isn’t a deep rooted, slow pace drama about people struggling in a world where the rich get richer and the poor get poorer but it does deal with the egocentric madness of the rich elite who believe they are untouchable only to be proved wrong by the underdog poor. Money is the ultimate power and goal for both classes and Kaiji comes to learn the true value of it and his own worth by pushing himself to the limit in a series of extreme gambling games. This is where the film really grips: in its three extended set-pieces of Kaiji, and others, gambling for their lives. The film is book-ended by some extreme card playing. Now watching people play cards may not at first seem all that thrilling but the filmmakers ring every moment of tension out of the card games (one of which is an elaborate version of Rock, Paper, Scissors) as the players lives are on the line and we are kept guessing as to who is actually going to make it through to the next round. But the centre piece of the film is an elaborate game where the “contestants” must make their way across a high beam between the tops of two skyscrapers in the middle of a ferocious storm. Tense, terrifying and sustained it’s an impressive sequence that shows what people will go to in order to save their own lives.

As mentioned the movie is based on a Manga and it certainly sticks to the spirit of a comic book strip. Meaning the often overacting, not least from ‘Battle Royale’ star Tatsuya Fujiwara, may irk some viewers. Despite the concepts of class separation and the evils of money, ‘Kaiji: The Ultimate Gambler’ still embraces its comic book roots meaning everything takes place in a heightened reality. This works fine within its framework and makes the film an often tense and exciting watch. Yeah, there is a little too much exposition as the characters explain everything they are thinking ad infinitum, the acting a little OTT (though Fujiwara gives it his all as the ever hopeful Kaiji) and the ending is perhaps somewhat anti-climactic. Still the build up and the ride Kaiji takes is an offbeat, often challenging and always entertaining one.

I can’t compare this film version to the source material (having never read the Manga) but ‘Kaiji: The Ultimate Gambler’ is a unique and very entertaining film if you can get on board with its offbeat vibe and characters. Different but good.