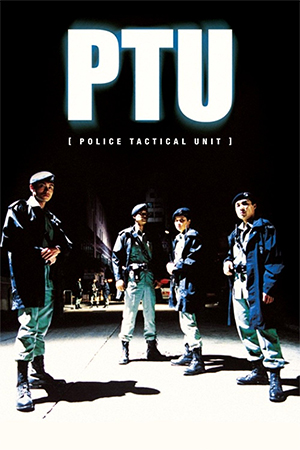 A stylish and moody piece from one of the masters of style and mood, ‘PTU’ is a dark journey into the equally dark heart of Hong Kong where the cops are almost as corrupt as the criminals. Set over the course of one neon lit night, Sergeant Lo (Suet) loses his gun after a scuffle with some local thugs. Desperate to find his gun and thinking one of the thugs has made off with it, Lo enlists the help of a Sergeant Ho (Yam) and his Police Tactical Unit (PTU): a unit of combat dressed cops who patrol the night time streets. Yet, these cops, both Lo and Ho, are far from heroes and as the search for the gun intensifies and their own morals take ever darker turns the two soon find themselves under tight scrutiny from a police investigation squad and stuck in the middle of a gang war which is about to erupt.

From it’s glorious widescreen photography (which really captures the neon lit streets and alleyways of night time Hong Kong), to the deliberate slow burn pace and lack of dialogue, To creates a gripping tale of characters painted in shades of grey as they make their way through the black of night. A story of a set of people, on both sides of the law, caught up in one unravelling incident set over the course of a single night, ‘PTU’ shows a Hong Kong far away from the hustle and bustle we often see. Deserted, often quiet and with people lurking here and there (not to mention weird kids creepily cycling about), the PTU units patrol these streets looking for those breaking the law under the cover of dark. While it may appear to be a straightforward police thriller, ‘PTU’ is a much darker ride as both the cops and criminals deal out some harsh violence to get what they want. Save for one stylish gun battle come the end, ‘PTU’ is very much a slow unravelling thriller all about mood and creating tension through style: which the film oozes in spades. This may test the patience of viewers wanting something a little faster paced.

Likewise, the lack of any real likeable characters may turn some people off but it actually makes the story all the more gripping as the PTU cops and the somewhat inept Lo see their questionable tactics and ways of extracting information from criminals catching up with them as they race towards dawn. Similar in tone to the likes of To’s ‘The Mission’, ‘Exiled’ and ‘Vengeance’ but lighter on the action, ‘PTU’ is still an excellent thriller thanks to the director’s trademark style, another stellar performance from the always good Simon Yam (likewise, Suet is excellent also) and tension that literally crackles under the heat of the neon lights illuminating the dark night time world of Hong Kong.