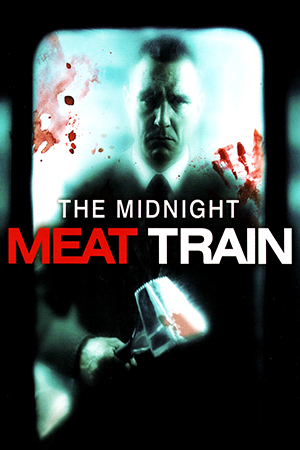 ‘Midnight Meat Train’ never really had a chance. A noted and cult Japanese director making his Hollywood debut (no doubt studio interference would rear its ugly head); the source material based on a short story by Clive Barker; and Vinnie Jones cast as the main bad guy meant this was never going to be a mainstream ‘critics’ cup of tea and fan boys would no doubt pick it apart. Which they did and it was critically drubbed and released in about 3 cinemas for about as many days. Well, I may be in the minority here but ‘Midnight Meat Train’ is actually pretty good. A decent and entertainingly gory slice of gothic horror and not bad for a Hollywood debut by a cult director.

People are being murdered on the late train on the New York subway. A strange man by the name of Mahogany (Jones) is mutilating people on the midnight train, the bodies then mysteriously disappearing. Struggling photographer Leon (Cooper) happens upon Mahogany one night while riding the train. Drawn to him and in need of some ‘real’ pictures for an upcoming show, Leon makes Mahogany his new subject photographing him riding the train, even going so far as to follow him to work. But soon Leon discovers Mahogany has a dark and dirty secret, a secret that Leon soon finds himself pulled into and one he may not escape when the midnight meat train makes its final stop.

Overall, ‘Midnight Meat Train’ (‘MMT’) is satisfyingly, gory, horror entertainment. The premise is certainly novel if taking on slightly absurd turns come the final third. The atmosphere is engagingly gothic and grimy, no screaming teens running around here. The cast are uniformly good (even Jones), especially Leslie Bibb who portrays a refreshingly strong female character for a horror movie. The ending, while taking a few too ridiculous turns to get there, if also refreshingly downbeat and is a nasty twist to boot. Kitamura gets to play with a Hollywood budget and crafts a good looking movie, his camerawork notable and his touch very evident in the fight and gore scenes. Just don’t expect ‘Versus’ or ‘Azumi’ as ‘MMT’ is still very much a Hollywood movie but not a bad one, especially for a successful Japanese director making his debut.

On the downside, CGI is perhaps a little overused in the gore scenes and while the gore and kills are inventive some may be tired with the graphic nature of these scenes after so many Saws, Hostels and Hills Have Eyes. Still, they are well paced and the flick never punks out on its dark nature despite one too many fights featuring Jones’s character come the final stretch. After lots of tense build up and one well crafted fight the flick almost descends into ‘Evil Dead’ type territory but manages to just rein it back in come the final twist.

Give it a chance and don’t go in determined to hate it as ‘MMT’ is an entertaining horror ride. Some may be disappointed that Kitmura’s kinetic style has been diluted somewhat by the Hollywood machine but it’s good to see him trying something different and at a more slow burn pace. Pleasantly surprising.