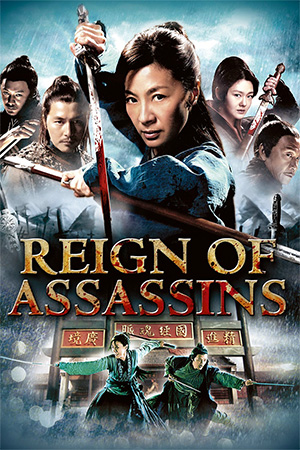 ‘Reign of Assassins’ is a breath of fresh air. With many new martial arts epics determined to bombard the viewer with excesses of melodrama, CGI and casts of thousands and thousands of extras, ‘Reign of Assassins’ reins (ahem!) all this in to tell a fairly contained story, through a small set of characters all the while delivering some impressive breakneck action that doesn’t rely on hordes of extras (CGI or otherwise) being slain in the name of excitement. Co-directors Su Chao-Pin and John Woo scale everything back and deliver a truly rousing romp that manages a near perfect balance between character and action.

Drizzle (Kelly Lin) is a badass warrior/assassin working for the Dark Stone clan. Deciding it’s time to part with the clan, Drizzle high tails it taking with her the remains of an ancient Buddhist monk. Said remains are meant to hold mythical powers and the Dark Stone lot aren’t too pleased that Drizzle has made away with them. Fearing for her safety, Drizzle decides to change her appearance through surgery and thus sets up a new life as Zeng Jing (Yeoh). Now content to live the quiet life as a fabric seller, Jing even strikes up a romance with kindly fellow Ah Sheng (Jung Woo-sung) and the two soon marry. However, Dark Stone have not forgotten Drizzle/Jing and are still as determined as ever to reclaim the mythical remains, meaning Jing’s new quiet life is not as safe as it seems.

While the plot summary above makes ‘Reign of Assassins’ sound pretty straightforward (and I suppose it is really) there are many twists and turns along the way that keep the narrative surprising and entertaining. Like any good wuxia film, not everyone is who he or she seems and most (if not all the characters) have ulterior motives for what they are doing.  This keeps proceedings eventful, and along with a handful of impressive action scenes, it’s the well-drawn characters that make ‘Reign of Assassins’ seem fresh. Jing and Sheng’s relationship, which forms the backbone of the film, is warm and pleasant and mercifully devoid of melodrama, chauvinistic tendencies or over-the-top comedy hi-jinks. The two leads are impressive as the married couple, their gentle and loving respect for one another making the dramatic turns of the final act seem more threatening. While the martial arts action takes a break during the middle section, its gives us viewers the chance to come to care for them meaning the stakes are higher come the finale. While the Dark Stone clan and their evil leader The Wheel King (Xueqi Wang) make for good bad guys their various stories and sub plots (including the recruitment of bad ass babe Barbie Hsu) are unfortunately underdeveloped and pushed to the sidelines: their quest for the monk’s remains being the main driving force for all the evil they dish out.

The other aspect ‘Reign of Assassins’ delivers so well on is the action. Perhaps this has to do with John Woo’s involvement (?) but the fights scenes (especially those in the final act) are wonderfully choreographed by Stephen Tung (‘Hard Boiled’, ‘The Blade’). There is a smattering of action that opens the film before proceedings take a break for a bit only for the fights scenes to really kick in when lives are threatened and motives are revealed towards the end. All but devoid of CGI interference and enhanced with subtle wirework, the hand-to-hand combat and weapon work is dazzling and tense stuff: not least when Ah Sheng eventually cuts lose in an awesome battle featuring Shawn Yue’s evil dart throwing assassin.

While the opening scenes and set up, featuring Kelly Lin, are far too rushed and the ending is a little too abrupt, convenient and has too many loose ends, it’s hard to fault the entertaining balance of story and action that ‘Reign of Assassins’ so confidently offers. Fast, fresh, funny and full of character and tension, this is wuxia done well and should be seen by fans of the genre at their earliest convenience.