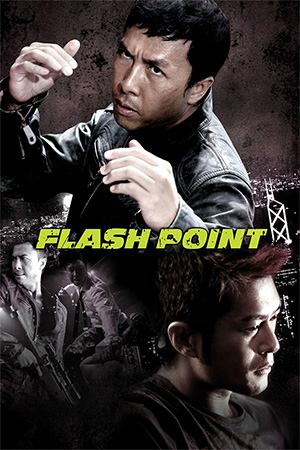 With critical acclaim for ‘Sha Po Lang’ still echoing around the various online fan communities, director Wilson Yip and Donnie Yen decided to re-combine their efforts for a second unrelated outing. Thus, ‘Flash Point’ was born and with it came a high degree of expectation. But could this fresh new pairing once again prove that Hong Kong action movies are not yet dead and buried?

Detective Sergeant Jun Ma (Yen) is a hard-hitting cop who prefers to do his talking with his fists and isn’t afraid to crack a few skulls to get the job done. However, as good as he is at his job there is still one Vietnamese gang who have so far eluded the scales of justice. In order for him to get the drop on them, Ma’s partner Wilson (Koo) has gone undercover within the gang and after years of service appears to have gained their trust. Unfortunately, this lifestyle has taken its toll on Wilson and when the proposed big bust of the gang begins, Wilson is exposed and becomes a target for the gang. Now it’s up to Ma to put his job to one side and protect his friend at all costs whilst still attempting to stay inside the guidelines of the law.

Although I considered ‘Sha Po Lang’ to be a solid effort with decent action scenes, somehow it didn’t quite cut it for me. It just seemed to lack that va-va-voom (for want of a better expression) that has always made the Hong Kong film industry such a powerhouse in the action genre. For this reason, I was perhaps a little sceptical about the hype that surrounded ‘Flash Point’ and went into it expecting an over-stylised yet vacant affair. Imagine my surprise when the film turned out to be an incredibly slick production that not only looked the business but also boasted a story that combined with the action to great effect. Perhaps it’s fair to say the plot isn’t exactly original and threatens to become overly predictable in places, but it’s subtle and strong enough to keep the film flowing and certainly seems fresher than the “corrupt cop” scenario dished up by ‘Sha Po Lang’. Another overall plus is the general pacing of the film as it has you siding with the heroes from the off and, despite the lack of action scenes, doesn’t open up too many unexplored avenues.

Performances from the leading cast are also very competent. Louis Koo isn’t exactly an actor I’ve never been overly enamoured with, but here he performs extremely well throughout and thankfully avoids his tendency to lapse into spates of over-acting (as he did in the rather inane ‘Rob-B-Hood’). Likewise, Donnie Yen certainly has his critics when it comes to acting but his mean and moody persona is perfect for an action hero. It’s also pleasing to see that he doesn’t pause to pose for the camera too frequently which is a criticism that he is often saddled with. Collin Chou slots nicely into the mix as the bad guy with a believably callous attitude as well as being a suitable physical opponent for Yen. As an added bonus, a slimmed-down Kent Cheng is also in amongst the cast and he seems ideal for the role of an ageing police chief.

As far as the action goes, ‘Flash Point’ isn’t quite the no-holds-barred kung fu extravaganza that you might be hoping for. However, the fight scenes we do get to see are certainly enough to get the adrenaline pumping. There are really only two main fight scenes to speak of, but Yen has chosen to inject a touch of originality in his choreography by utilising a raw yet powerful style that concentrates on grappling rather than relying on his signature kicks. This works exceptionally well for the film’s atmosphere and the final duel between Yen and Chou is particularly impressive. There’s also a certain degree of gunplay on offer that, whilst not quite in the same league as John Woo, is very entertaining and the use of a sniper rifle during one part of the finale is nothing short of genius.

‘Flash Point’ isn’t a perfect film in the classical cinematic sense, but it is a damn fine action movie that doesn’t short change the viewer in any department. I often seem to be guilty of stating that each new promising Hong Kong action film has the industry back on track but ‘Flash Point’ is clearly a step in the right direction. If they keep this up, then Yip and Yen are only a stone’s throw away from an absolute classic.